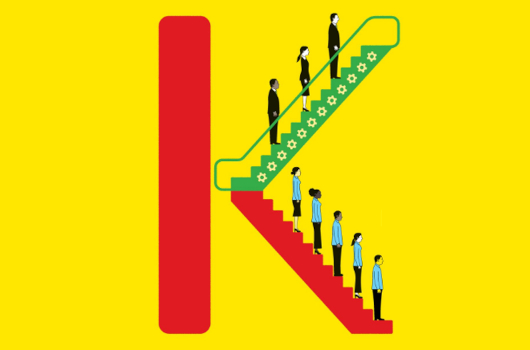 Massive support stimulus from central banks together with positive Covid-19 vaccine trials have supported market hopes of a V-shaped rebound in the global economy in 2021. However, there are many different views of the potential shape of economic recovery which include V, W, U, L and a Nike’s logo shaped ‘swoosh’. Last week we saw someone forecast a new shape – K. This would appear to represent the difference between the winners (upstroke) and losers (downstroke).

In terms of growth, China looks to be a winner as it was the first to introduce lockdown and enter recession. Having been the source of Covid-19, it is likely to be the first out and may be the only country to see its economy grow in 2020. China still denies responsibility for the outbreak, something President Trump looks unlikely to forget if he wins the US Presidential election.

All other leading economies went into recession in the second quarter of 2020 as they imposed lockdown measures and we wait to see which ones rebound the strongest. The UK took a severe knock in the second quarter due to its dependence upon the service sector although the economy appears to be recovering as we head into the Autumn. For all countries, jobs remain key.

Looking at UK households, the winners have been those able to work from home or with a secure job who, due to a period of enforced saving during lockdown, are better off. Housing activity, home refurbishment and DIY have all benefited from pent-up demand. By comparison the service sector has been particularly hit hard by lockdown. Sadly, the younger generation look to be amongst the losers, for although relatively immune from Covid-19 have endured exam chaos and now face a lack of job prospects. As we have seen with BLM and Extinction Rebellion, the younger generation are no longer inclined to suffer in silence – politicians take note. The government has launched a £2bn kick-starter scheme to help the under-25’s into work, but will it be enough?

‘What goes up, must come down’. The US tech bubble finally burst last week as the reason for the most recent surge became apparent with massive speculative trading by Japan’s Softbank using derivatives the suspected cause. This was compounded by news that Tesla had failed to be promoted into the S&P 500 index. Shares in Tesla fell by over 33% from their high, while Apple which had recently become the first $2trillion value US company also dropped to 15% below its high. The US technology index NASDAQ saw its fastest ever reverse from high to correction with a fall of over 10% in three days.

President Donald Trump has raised the possibility of ‘decoupling’ the US economy from China and promised to bring manufacturing jobs back to America. He also suggested that if he is re-elected that he would prohibit government contracts being awarded to companies that outsource jobs to China. This comes at a time of increased tension between the US and China over technology, control of the South China Sea, Hong Kong democracy and the Covid-19 pandemic. In a speech designed to appeal to voters he also suggested that a Covid-19 vaccine may be ready as early as October. Despite the threats of ‘decoupling’ a survey carried out by PwC for the American Chamber of Commerce in Shanghai suggested that fewer than 4% of US companies based in China were relocating production capacity to the US, and over 70% of respondents had no intention to move operations. That result may be indicative that some business leaders are weighing Trump’s odds in the upcoming Presidential election, as the latest surveys continue to point to a narrow lead for Joe Biden.

China said its troops were forced to take ‘countermeasures’ after Indian soldiers crossed the border and opened fire in the disputed region of Kashmir. Meanwhile, tensions with the US continued to escalate as Beijing accused the Trump administration of “bullying” its tech sector.

Covid-19 cases continue to rise, but in the UK and Europe, this appears to be driven by the younger generation as serious hospital admissions have not risen. This has led the government to ban meetings of more than six people in England. Meanwhile, the Oxford vaccine trial with AstraZeneca was put on hold due to a suspected serious adverse reaction in one of the participants, however, trials were allowed to resume in the UK after UK regulators concluded over the weekend that it was safe to do so. AstraZeneca is one of nine Phase III Covid-19 vaccine trials globally.

The giant ‘game of chicken’ between the UK and EU over Brexit continued last week. The UK government has tabled a Bill for internal trade and Northern Ireland which is said to be against international law and breaks the Withdrawal Agreement. As a result, Boris Johnson may be facing a rebellion of up to 30 Tory MPs and the EU could decide to undertake legal action. Sterling slipped back below $1.30 reflecting the added uncertainty.

In the UK, the Halifax recorded a new peak in the average price of a house to £245,000, while warning that it is ‘highly unlikely’ that current house price inflation will be maintained as support measures are withdrawn and the true state of the jobs market becomes clearer. In line with that view, the Centre for Economics and Business Research (CEBR) also suggests the current strength in the UK housing market is likely to be an ‘anomaly’ driven by emergency policies and estimates a decline in prices of -14% in 2021. Meanwhile, consumer spending continued to recover with the BRC reporting a 3.9% growth in sales in August compared to last year.

In Europe, Germany’s industrial production rose for a third straight month in July driven by a recovery in car production although construction activity contracted.

Brent oil eased back below $40 as Chinese oil demand has softened since mid-July while demand from American drivers has slowed. Saudi Arabia’s Aramco has also cut its crude export prices for a number of key markets. The OPEC+ meeting scheduled for this week will assess production cuts.

Finally, ‘thar she blows!’. Shareholders in Softbank wiped nearly $9bn off its market value in a day after revelations that the Japanese conglomerate was the mystery ‘NASDAQ whale’ that had driven US technology stocks to record highs. With the bursting of the tech bubble, some believe Softbank may have even become too big to fail!