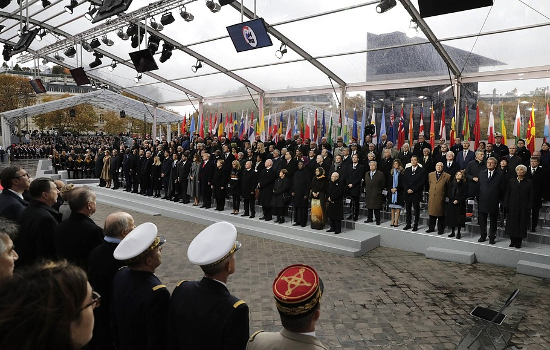 At a time when we have chance to reflect on the war to end all wars, around 70 world leaders  gathered in Paris to attend a peace conference – the Paris Peace Forum. Recent political disharmony has centred on national interests and spurred increased military tensions.

As we approach a new era of independence, where does the UK stand?

The recent budget provided an additional £1bn for the Ministry of Defence (MOD), but is it enough given the threat the UK faces from traditional sources and cyberattacks? The British Armed Forces are estimated to be currently short of 8,200 soldiers, sailors and air personnel. To tackle the shortfall, it is reported that foreign nationals living abroad will be allowed to join Britain’s Armed Forces which, it is hoped could provide an extra 1,350 personnel a year. Humanitarian and military operations are likely to continue to place a heavy burden on the UK’s Armed Forces. The Armed Forces were involved in 25 operations worldwide in 2016/17 and the Royal Air Force is undertaking more missions than it has for a quarter of a century.

The UK’s finances are improving and Chancellor Philip Hamond has suggested the end of austerity in his recent budget. While this may be true for the NHS it is not necessarily the case for all government departments including the MOD. Whoever, is in power faces a difficult task. If higher defence spending is required then this implies either increased government borrowing or higher taxes.

Despite high level efforts to change attitudes, the world remains a dangerous place.

The Republicans did broadly as polling expected in the US mid-term elections but President Trump may have to water down some of his plans. Will President Trump soften his rhetoric on trade now that the mid-terms are out of the way? Focus will now turn to the G20 summit at the end of the month and meeting between Trump and Xi. Elsewhere, the clock is ticking down on the Italian budget standoff. Just how tough will Brussels be once Italy is in the EU Excessive Deficit procedure? In the meantime, eurozone economic indicators continue to soften.

Sterling rallied above $1.31 on hopes of progress on Brexit but then fell back below $1.29 as Brussels rejected Theresa May’s key Brexit proposal, which was intended to avoid the UK being trapped in an indefinite customs union. Then the DUP said it would not support the PM’s current plan, plunging Theresa May into a deeper crisis.

In the UK, consumer spending grew by 4.4% year-on-year in October, according to Barclaycard data. Cinema and concert sales grew strongly but clothing sales fell by 2.4%. However, Brexit uncertainty appears to be overhanging the housing market. Data from The Royal Institute of Chartered Surveyors showed new buyer enquiries continuing to fall.

In Europe, business confidence dipped to a two-year low in October reflecting an export-led slowdown, linked to growing trade tensions and tariffs as well as increasing political uncertainty. The head of the European Commission’s economic department maintained the region’s growth rate for 2019 at 1.9% but lowered its 2020 forecast growth to 1.7%. US interest rate policy was highlighted as the key risk along with trade tariffs. Within the Euro bloc, besides Brexit, uncertainty about the outlook for public finances in Italy has led to higher interest spreads, and the interaction of sovereign debt with the banking sector is still of concern. In the meantime, there are media reports that Italy is considering lowering its budget growth forecasts in order to reach a deal with the European Commission on fiscal policy.

The US mid-term elections saw the Democrats re-taking the House of Representatives while the Republicans maintained control of the Senate. The results were largely as expected but now leaves President Trump facing a divided Congress which is likely to make pushing through his policy objectives more difficult, at least for those requiring legislative change. Market attention now turns to the Federal Reserve and interest rate policy. The Federal Reserve issued its latest policy statement and confirmed it expects ‘further gradual increases’. Financial futures are currently predicting an 80% chance of a 0.25% December rate hike. The US 10-year Treasury bond yield edged back up to 3.2%.

China reported a 15.6% increase in exports in October although some of this was no doubt due to orders brought forward to beat the next round of trade tariffs. In a sign that China is strengthening its economic stimulus efforts, plans are being made to increase lending to smaller companies, including requiring Chinese banks to increase the proportion of loans made to private companies.

Brent oil entered a ‘bear market’ falling by over 20% from its recent peak to below $70. Besides higher output from Saudi Arabia, Russia and the US, Washington sanctions on Iran have not been as hard as feared, while there is also talk, that Iraq is increasing output. However, Brent oil has subsequently recovered above $71 as over the weekend Saudi Arabia said it would supply 500,000 fewer barrels a day in December, due to lower demand.

Finally, President Trump may be engaged in a trade war but the first family appears happy to do business with China. Companies linked to Donald Trump and his daughter Ivanka have been granted 18 Chinese trademarks over the last 18 months, including for Ivanka-branded fashion goods such as sunglasses, handbags, shoes and jewellery.