No Man Is an Island 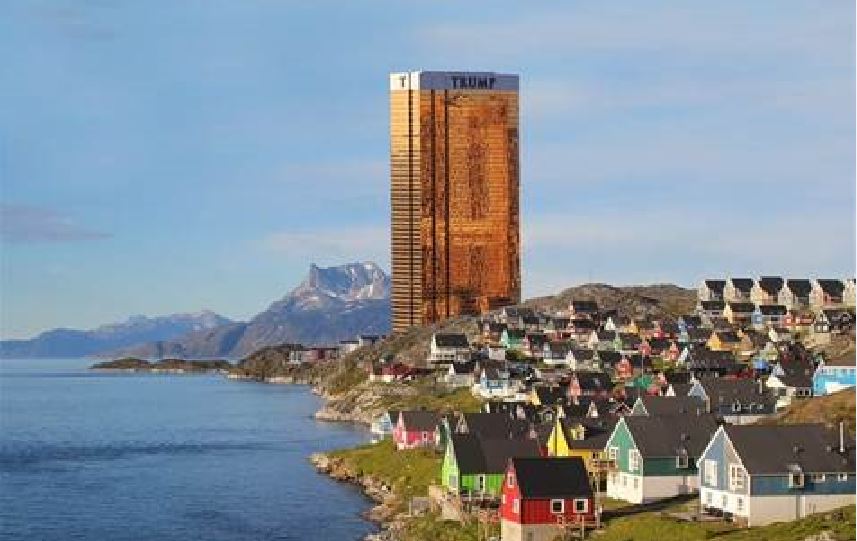 Trump to buy Greenland? Danes were scratching their heads on Friday, as rumours started that Donald Trump had floated the idea of purchasing Greenland from Denmark. Initially the news was greeted with some humour, with a former prime minister describing it as an April Fool’s Joke.  However, over the weekend, when confronted, Trump confirmed his interest in “essentially a real estate deal”, but “not No1 on the burner”.

Greenland is the world’s biggest island and is home to just 56,000 residents. It is self-governing Danish territory that depends on Copenhagen for foreign affairs and national security but is geographically part of North America. In his statement Trump stated Greenland was “hurting Denmark very badly because they’re losing almost $700m a year carrying it”.

Any move by the US to seek greater control over Greenland would spark alarm bells in Moscow. Russia has spent billions of dollars building or upgrading seven military bases in the Arctic region in an attempt by Russia to exert more control over the strategically positioned region.

Intriguingly, the US actually has a history of trying to buy Greenland, most recently in 1946 when president Harry Truman offered $100m.

US equities ended their third consecutive week lower, despite a rally on Friday, as geo-political developments came to the fore last week. Hong Kong airport was forced to cancel flights due to protests that Beijing referred to as ‘terrorism’. Hong Kong’s Hang Seng Index has fallen over 10% so far this month as the protests have escalated. The situation threatens the city’s reputation as a safe and stable business hub. The Hong Kong Monetary Authority cut its 2020 economic growth forecast range from 2%-3% to 0%-1% to reflect the US/China trade war, weakening Chines currency and prodemocracy protests.

Political uncertainty in Argentina and Italy also clouded the outlook for global investors. Meanwhile, the risk of a no deal Brexit saw Sterling hovering just above $1.20. Weak economic data from Germany and China didn’t help the mood either. Trade tensions between the US and China also overshadowed markets. Initially markets reacted positively to the news that the US intended to delay some tariff hikes. However, China subsequently said that it would take ‘necessary countermeasures’ against the original US tariffs.

With the trade dispute dragging on, the global bond market continues to suggest the risk of recession with the 10-year bond yield curve inverting in both the US and UK. This in turn fed through into weaker global equity markets. Typically, the period from a bond inversion to recession has been around 18 months. However, the reliability of the inversion of the US Treasury yield curve in a QE-driven world is unproven, while US economic data, although sluggish remains a long way from contraction territory. The worries are greater elsewhere but we know some of this is due to Brexit and political uncertainty. The bond market is anticipating the return of QE but there is a far more limited quantity of bonds for central banks to purchase this time. Government fiscal stimulus is needed this time and interestingly Sweden issued government debt at a negative yield for the first time ever. Those governments able to borrow at negative interest rates should surely be considering fiscal stimulus?

The US said that it would delay imposing some of the tariffs on $300bn of Chinese goods, such as smartphones, laptops, video game consoles, some toys and certain items of clothing and footwear from 1st September until 15th December. Tariffs on an estimated $160bn of consumer goods will be deferred with tariffs to be imposed on $140bn of goods on 1st September. The tariff deferral looks more like a way of avoiding price rises for US consumers ahead of Christmas shopping rather than a genuine olive branch. China responded by saying that it would take ‘necessary countermeasures’ against the $300bn US tariffs.

News over the weekend of Beijing’s plan to reform its interest-rate system and cut borrowing costs should support investor sentiment. Given recent market volatility, focus will also turn to Fed Chairman Jerome Powell who’s due to speak at Kansas Fed’s annual Jackson Hole gathering on Friday. Will US policymakers add to July’s interest-rate cut?

Turning to Brexit, the Government expects a group of MPs to try to block a no-deal Brexit in mid-September by attempting to pass legislation when Parliament returns next month. The BBC suggested that PM Boris Johnson is working on the belief that the EU will wait until after that date before engaging in further negotiations. Speaker of the House of Commons John Bercow said he would not allow Boris Johnson to close Parliament to push through Brexit. The likelihood of a general election was increased by a Conservative MP who accidentally published a draft email about his ‘GE2019team’. Indeed, with each day that passes, there are increasing signs that Boris Johnson is preparing for a general election over the next few months, although this is not hugely surprising given a majority of just one MP with the support of the DUP.

In the UK, wage growth reached an 11-year high of 3.9% in the year to June and the employment rate was its joint-highest since 1971. While positive for the UK economy, this continues to be completely overshadowed by Brexit uncertainty. The UK Gilt curve inverted for the first time since the financial crisis. This means that the UK government can currently borrow from markets more cheaply over a decade than it can over three months or two years. In the past an inverted Gilt yield curve has been a signal of very weak economic growth or possibly recession.

In Europe, Germany’s economy contracted by 0.1% in the second quarter of 2019. This came as no surprise given Germany is a manufacturing and export led economy and exposed to Brexit and US/China trade tariff uncertainty.

In the US, July core consumer price inflation (CPI) was slightly higher than expected, nonetheless US interest rate futures still appear to be pricing in another 0.25% cut from the Federal Reserve next month. The US Treasury 10-year bond yield curve inverted for the first time since 2007 compared to the 2-year Treasury bond.

US retail sales rose 0.7% in July, which helped to ease concerns about a recession in the world’s biggest economy.

Singapore’s Ministry of Trade & Industry cut its economic growth forecast for 2019 from 1% to zero due to the more challenging outlook due to US/China trade tariff uncertainty and a deepening downturn in the global electronics cycle.

In emerging markets, fears of the return of populist leader Alberto Fernandez saw the Argentinian Peso lose a fifth of its value while Argentina’s stock market plunged 48% in Dollar value, marking the second-biggest one day fall of some 94 stock exchanges since 1950.

Brent oil briefly recovered above $60 on the news of the deferral of further US tariffs on Chinese goods but edged back on higher US oil inventory data.

Finally, two cosmetic surgery companies which operate from some 30 clinics have gone into administration with debts of £6.5m amidst Brexit uncertainty. The business and assets have been acquired by The Transform Hospital Group. An example perhaps of weaker demand for ‘bigger ticket’ consumer products?