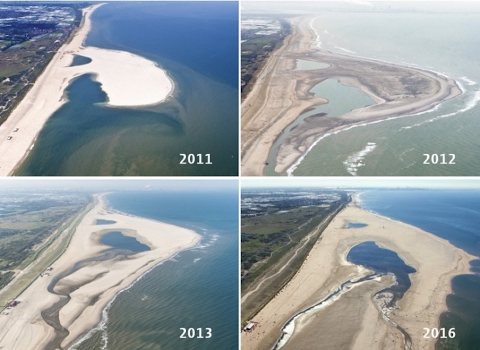 One in six people in England are living in properties at risk of flooding. Rising sea levels and coastal erosion are becoming an increasing concern for many small communities, along parts of Britain’s shore line.

This is particularly so for Norfolk where several metres of coastline can be washed away during big storms. Those property owners living along eroding cliff tops appear to be fighting a losing battle against the sea. The government has increased spending and is providing £2.6 billion over six years, on more than 1,000 projects to better protect 300,000 homes. This is on top of £1 billion by 2020 to maintain flood defences.

The Bacton Gas Terminal supplies one-third of the UK’s gas. When it was built in the 1960’s it was over 100 metres from the Norfolk coastline but today is teetering just metres from a cliff edge. An innovative coastal protection solution is being employed to protect this facility inspired by a larger-scale experiment in the Netherlands, called the Zandmotor*.

Some 2million cubic metres of sand is being shifted to create a 6km-long dune at a cost of £20m. The ‘sand scaping’ project, the first of its kind in the UK, will use the wind, waves and tides to move the sand to where it needs to be over time to provide 15-20 years of protection. Besides the Bacton Terminal, the two nearby villages of Bacton and Walcott will also be protected. Dutch engineers believe this will be more effective than traditional concrete sea defences which can create flooding risk further along the shoreline. Other small coastal communities threatened by coastal erosion will no doubt be watching this project closely.

By the end of this year the government will set out its policy direction to better prepare the country for future flooding and coastal erosion – but will it still be in power?

The fallout from President Trump’s latest tariff hike against China continued and the latest developments are likely to have increased tensions between the two super-powers. Markets, not surprisingly, reacted badly to this with government bond yields continuing to fall, while the US S&P index posted its largest single-day drop of the year.  Thoughts turned to what negative bond yields are telling us about the global economy. This would appear to be signalling Armageddon or does it reflect the anticipated return of QE? Might is also reflect concerns about a potential currency war as a result of the current trade tariff dispute?

Trump tweeted’ China dropped the price of their currency to an almost historic low. It’s called ‘currency manipulation’. Are you listening Federal Reserve? This is a major violation which will greatly weaken China over time!’ This followed a drop in the Chinese Yuan below the $7 level for the first time since 2008. This caught markets by surprise as in the past China had supported the currency when it reached this level. The US government said that Treasury Secretary Steven Mnuchin will now engage with the IMF to ‘eliminate the unfair competitive advantage created by China’s latest actions.’  However, some Asian analysts suggested that while China’s central bank had previously tried everything to protect the seven yuan psychological baseline, but in the past few months it had no intention to ‘defend the seven’, and that this key level would be breached at some point. However, the People’s Bank of China said it intended to issue over $4.25bn bills in Hong Kong, an act seen as countering any possible short-selling of the currency. Trump’s economic advisor Larry Kudlow sought to calm markets by saying that the US President is flexible on China tariffs and that he would like to continue negotiations. However, James Bullard, a member of the US Federal Reserve (Fed) said he expects trade uncertainties to continue for a number of years which is likely to impact on global investment and economic growth prospects.

Bond yields continued to fall and the yield on Dutch 30-year bonds turned negative for the first time ever. Effectively this means investors would lose money if they were to buy and hold to maturity. Besides the ‘flight to safety’, this suggests fixed interest investors expect the European Central Bank to undertake more stimulus measures (QE). While President Trump accused China of currency manipulation, other central banks have been cutting interest rates over the last week including New Zealand, India and Thailand. President Trump seized on this news to tweet ‘Three more central banks cut rates. Fed must cut rates bigger and faster’.

Another alternative to QE is fiscal stimulus. There were reports that Germany is considering fiscal stimulus with investment in renewable energy projects. This would appear a good thing to spend on, particularly as Germany can borrow money at negative interest rates.

While Sterling continued to languish below $1.21, Brexit uncertainty was also reflected in a survey of global fund managers which revealed that oversea ownership of UK assets had fallen to a record low and beneath the level immediately following the 2016 EU Referendum. UK diplomats have been briefed, that Boris Johnson is now intent on hard Brexit and has no desire to renegotiate with the EU.  In turn, the EU has said there is no basis for any further Brexit talks, while the UK insists on making changes to Theresa May’s withdrawal agreement. The name on the door may have changed, but the current occupant of No10 does not appear any closer to a solution for the issues which bedevilled his predecessor, in particular, consensus in Parliament and the Irish backstop.

In the UK, the economy contracted by 0.2% in the second quarter which cannot be entirely blamed on a reversal of the first quarter’s Brexit stock building. The underlying trend in both the service and manufacturing sectors deteriorated and there is little sign of much improvement in the third quarter.

In Europe, the Italian coalition government looks set to fall with the coalition partner, The League, seeking a snap election.

In the US, the July service sector economic activity indicator dropped to a three- year low but remains in expansion.

Trade tensions between South Korea and Japan continued to escalate with the former accusing the latter of orchestrating an ‘economic attack’.

In China, the services sector economic activity indicator dropped to a five-month low. However, there was an unexpected recovery in export growth in July although imports remained weak in line with soft domestic demand. Protests continued in Hong Kong.

Geo-political tensions continue around the world. North Korea has undertaken more missile tests while the row between India and Pakistan over the disputed territory of Kashmir has deepened with Pakistan’s announcement that it was expelling India’s top diplomat and suspending trade.

Despite ongoing tension in the strait of Hormuz, Brent oil slipped back to $57, a seven- month low, on trade tariff uncertainty. However, the price recovered slightly as Saudi Arabia discussed with other OPEC members the potential responses to the price slide.

Finally, an example of the deterioration in trade relations between Japan and South Korea. Tokyo’s export restrictions on Seoul have provoked a consumer backlash with South Koreans boycotting Japanese goods. Last month, Toyota’s sales in South Korea slumped 32% from a year earlier while Honda’s sales dropped by 34%. That’s got to hurt!