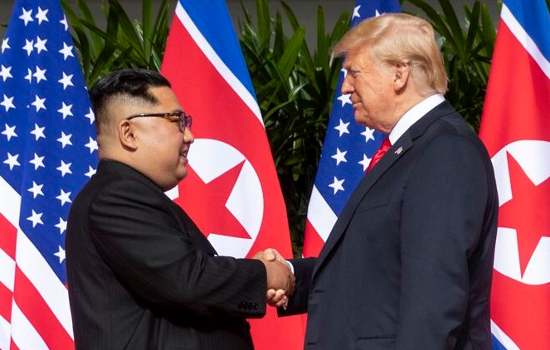 On June 30th 2019, President Trump made history by becoming the first serving US President to step into North Korea in a meeting with Kim Jong-Un at the demilitarised zone. Trump said he had ‘developed a great relationship’ with the North Korean leader.

However, just a few months later and tensions have resurfaced. North Korea is not happy with joint military exercises being carried out by the US and South Korea. Pyongyang has described the exercises as a violation of peace agreements. In turn, North Korea has undertaken more missiles launches.

To further add to tensions, a leaked United Nations (UN) report suggests North Korea has stolen $2bn to fund its weapon programme using cyber-attacks. The UN is believed to be investigating some 35 cyber-attacks on banks and crypto-currency exchanges. The US State Department has called for further action to counter North Korea’s ability to conduct malicious cyber activity which it believes is used to support its WMD and ballistic missile programmes.

Asia is certainly making headlines at the moment. Besides North Korea, there is the deterioration in trade relations between Japan and South Korea as well as the US/China trade dispute. Relations between the US and China have been further complicated by a potential US defence deal with Taiwan. China must also be considering taking action to deal with the protests in Hong Kong. The latter, is an important test for just how far China is willing to exert its influence. Ominously, it has specialist anti-riot troops massed on the border.

White House officials talked up the strength of the US economy following the recent market sell-off although President Trump is still urging the US Federal Reserve (Fed) to cut interest rates by 1% and re-start QE! In addition, he said he is considering a temporary payroll tax cut to help boost the US economy. The IMF also called for governments to use fiscal measures to support the global economy. With government bond yields at record lows this would appear an opportunity to raise money and invest in new infrastructure or clean energy projects. The resignation of Italy’s PM sent a shockwave across European markets with the Italian banking sector particularly hard hit.

The US/China trade dispute continued to ‘see-saw’ with a gradual escalation in tension but ended the week with a faint glimmer of hope. Initially, President Trump commented that he was ‘not ready to make a deal with China’. However, the US did confirm a further 90-day component supply reprieve for Huawei but did criticise China over Hong Kong and warned that Huawei was not the only Chinese company that posed a risk to national security. With no tangible progress on trade talks, China then announced some further stimulus measures to support its economy. China has also threatened imposing sanctions on US firms involved in a potential $8bn defence deal with Taiwan. China then imposed 10% tariffs of $75bn of US goods. President Trump fired off a series of tweets saying ‘we don’t need China and, frankly, would be better off without them’ while ordering US companies to start looking for alternatives to manufacturing in China. However, over the weekend, at the G7 meeting, President Trump said that the US and China will ‘very shortly’ resume trade talks.

PM Boris Johnson has written to European Council president Donald Tusk calling for the backstop plan for the Irish border to be scrapped. However, Irish Taoiseach Leo Varadkar insisted the backstop must remain part of the withdrawal agreement and cannot be changed. Boris Johnson then met German Chancellor Angela Merkel and French President Emmanuel Macron and came away with the ball in his court to come up with an alternative solution to the Irish backstop within 30 days. Sterling rallied slightly to $1.22 following the meetings. Meanwhile, a poll for the London Evening Standard conducted by KantarTNS revealed the Conservative party up 17 points to 42%, ahead of Labour on 25% and the LibDems on 15%. This poll would translate into a big majority for Boris Johnson at a snap election. Sounds like he just needs to get Brexit sorted out and call a general election. Simples!

In the UK, the CBI reported that retail sales in August dropped at the fastest pace since 2008. However, does this reflect Brexit uncertainty or an unusually wet and windy month?

In Europe, German media reports suggested that Chancellor Angela Merkel is ready to run a budget deficit if Europe’s largest economy goes into recession. Any shortfall in tax revenue from an economic downturn could be offset by new debt issuance. Germany’s manufacturing driven economy is not only exposed to trade tariffs and Brexit uncertainty but structural shifts in the global car market. Third quarter economic growth is likely to confirm Germany in recession with two consecutive quarters of negative growth. Last week, the German government announced a £2bn 30-year bund auction with a zero coupon. Elsewhere, Italy’s PM Giuseppe Conte resigned following the no-confidence motion from coalition partner Matteo Salvini of the nationalist League party. They will attempt to form as new coalition and if it’s not successful then we can expect another snap election.

In the US, the latest meeting minutes from the Federal Reserve (Fed) revealed a split committee. Two Fed members wanted to cut interest rates by 0.5% while two argued for no cut as they see the US economy moving along nicely. However, it is the global situation which seems to be driving the thoughts of those thinking about a big rate cut. Another rate cut of at least 0.25% is expected at the next Fed meeting on September 19th. Trade war uncertainty looks as if it is having some effect on US business investment plans which is looking weaker in the third quarter judging by the latest US durable goods data. ‘Flash’ manufacturing and service sector activity data for August was also a bit softer than expected.

In China, the People’s Bank of China unveiled interest rate reforms to help push borrowing cost lower while there were reports that Beijing is considering allowing regional governments to issue more bonds for infrastructure investment.

Brent oil edged back to $59 on US/China trade tariff uncertainty despite continued tension in the Gulf, this time from an explosive-laden drone attack on a Saudi Arabian oil field by Yemeni- based Houthi rebels.

Finally, following last week’s Alpha Bites ‘No Man is an Island’, President Trump has cancelled a state visit to Denmark after the nation’s PM said Greenland was not for sale to the US. Has this really happened? Just what is ‘fake news’ these days?

Read Last Week’s Alpha Bites – No Man is an Island