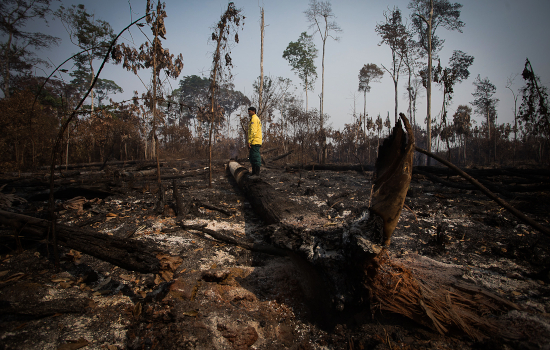 Environmental, Social and Corporate Governance (ESG) refers to the three central factors in measuring the sustainability and societal impact of investment in a company or business.

It was pleasing to see true ESG in action recently with the news that 40 UK food businesses have threatened to stop sourcing products from Brazil over proposed land reforms. Sainsbury’s, Aldi, Greggs, the Co-op and the British Retail Consortium are among the major organisations to sign the open letter.

Under the leadership of right-wing President Jair Bolsanaro, the level of de-forestation in the Amazon is reported as being the highest since 2008. The vast majority of land is cleared either to graze cattle for beef exports or to grow soy, which goes into animal feed around the world. The new law would allow land that has been illegally occupied since 2014 to be put up for sale. Will Bolsanaro change course? Given his handling of the Covid-19 pandemic in Brazil, he does appear quite stubborn in his views but they do say ‘money talks’ so let’s hope the more companies and countries that come to the defence of the Amazon, the better.

While we all want a greener future, it cannot be achieved without the necessary raw materials such as copper, lithium and rare earth metals. A recent report for Reuters suggested that global mining companies may need to invest $1.7trillion in exploration and mine development in the years ahead to supply a sufficient quantity of the key metals to enable the transition to a low carbon global economy and limit the rise in global temperatures. For example, Tesla has said it will soon require more than $1bn a year of lithium and nickel from Australian miners for its electric vehicles. So, in order to protect the planet, it sounds as if we are going to have to dig even more of it up!

A quieter week with the half-term holiday, the official start of the British Summer and hot weather!

Markets continue to watch inflation and wage data. More companies with US operations are highlighting staff shortages. In the UK, the long-suffering hospitality sector is benefiting from the hot weather but is currently suffering staff shortages. The US jobs data last week was weaker than forecast, easing concerns about Federal Reserve bond tapering but seasonality and the pandemic make current data difficult to interpret. US 10-year Treasury yields dipped back below 1.6% on the jobs data. The key number this week will therefore be the US inflation data on Thursday.

The other issue for markets remains Covid-19. The ramp up in vaccination across Europe has seen the second wave subside and the EU is proposing lifting all quarantine requirements for those that are fully vaccinated from 1st July. However, Portugal has lost its UK government green list status after concerns about the growth of the ‘Nepal variant’. In the UK, some scientists are still raising concerns about the Indian or ‘Delta’ variant ahead of the 14th June government decision day for exit from lockdown on 21st June. Health Minister Matt Hancock has said that the UK government is ‘open to delaying the 21st June unlocking’. New cases are rising and hospitalisations have increased although two-thirds of these are people who have not been vaccinated. Meanwhile, over 77% of the UK adult population have had one jab and almost 53% have had both jabs.

In Asia, a new wave of Covid-19 appears to be developing out of India which hopefully they will get under control quickly. China has identified the first Indian variant cases in Guangdong. Vietnam has identified a new variant, Taiwan is in full lockdown and in Thailand, Bangkok remains in partial-lockdown, while in Australia the state of Victoria has extended lockdown. European PMI business activity indicators have been touching fresh highs but those in Asia have slowed noticeably in May.

The minimum corporation tax rate of 15% agreed by the G7 finance ministers was the headline story over the weekend, but the immediate market implications are likely to be minimal. No G7 nation currently charges that low a rate and the new proposed minimum has to be agreed next by the G20. The news was welcomed by the larger global ‘tech’ giants such as Amazon, Facebook and Google, widely perceived to be the main target of the measures.

The UK May manufacturing PMI improved to 65.6, the highest reading on record. There was also a record gain in new business but while business sentiment was strong, many companies also highlighted raw material price inflation. The composite PMI covering manufacturing and services was 62.9- the highest reading since the index began in 1998. Meanwhile, the Nationwide confirmed the ongoing strength of the UK housing market.

In Europe, the manufacturing PMI improved to 63.1 with the strongest output growth since the survey commenced in 1997. Higher energy prices pushed Eurozone CPI inflation up to 2% in May.

In the US, the ISM manufacturing index edged up to 61.2 with solid growth in new orders although many companies highlighted supply chain issues. The US ISM services sector PMI activity indicator hit an all-time high in May of 64. The US Federal Reserve ‘beige book’ noted that the vaccination programme had contributed to the ‘somewhat faster rate of economic expansion in recent weeks’ but also highlighted that some businesses continue to suffer supply disruptions and labour shortages.

In Asia, manufacturing PMI slowed noticeably in May, reflecting the spread of the Indian Covid-19 variant and lockdown measures. For example, South Korea dipped to 53.7 from 54.6, Vietnam to 53.1 from 54.7 while India dropped to 50.8 from 55.5.

Brent oil held at $71 after OPEC+ confirmed its plan to gradually ease production cuts through July.

Finally, working from home (WFH) has become quite popular for many office workers. However, some Chinese office workers may be praying they can WFH permanently. This follows news that SEG Plaza, a 300-metre tall, 70 floor sky-scraper in Shenzhen had started wobbling and this was not due to an earthquake or high winds. An investigation is underway but, China’s fast-track building processes along with the use of cheaper and inferior materials may be to blame. The SEG Plaza was built at a rate of a new floor every 2.7 days – twice as fast as traditional construction methods. Meanwhile, in the UK, four years on from the Grenfell Tower tragedy and the fire-resistant cladding nightmare goes on for many apartment owners.