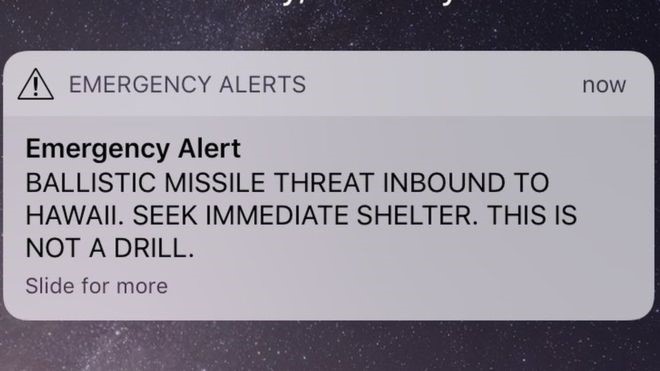 An incoming missile alert plunged residents of Hawaii into panic on Saturday morning, before it was declared a false alarm. State Governor David Ige apologised for the text and said it was caused by an employee pressing the wrong button.

2018 looks as it is starting where 2017 ended, with President Donald Trump pushing the buttons. Cancelling his high-profile visit to London, a suggested pay off to an ‘adult entertainer’, defending racist accusations, and of course tweets about North Korea’s leader Kim Jong Un. Trump has tweeted ‘Will someone from his depleted and food starved regime please inform him that I too have a Nuclear Button, but it is a much bigger and more powerful one than his, and my Button works’. Latterly, North Korea has agreed to send a delegation to the 2018 Winter Olympics in South Korea, in February. The North and South have also agreed to hold military talks to defuse border tension.

While, international attention has been diverted by North Korea, China has been making geopolitical gains further south. Throughout 2017, Beijing has been equipping its artificial islands in the contested waters of the South China Sea, for potential military use. The shift of attention on the South China Sea, reflects a subtle change in priorities under the administration of Donald Trump, whose security policy has focused on North Korea and lacked enthusiasm for foreign alliances. Many of these smaller countries appear to have been largely ignored by Washington in 2017 and have thus, been less bold about defending their rights. The USA needs China’s support to reign in Kim Jong Un but also has to address China’s growing naval military might. Last week, Japan summoned the Chinese ambassador in Tokyo, after a Chinese frigate sailed near disputed islands in the East China Sea.

The World economy is doing well, but is President Trump’s international policy, creating a geo-political risk for investors in 2018?

A number of the world’s equity markets touched or remained close to record highs, as many investors continued to take the ‘Goldilocks’ view about the global outlook with neither too hot inflation or too cold growth. ‘A rising tide floats all boats’ and UK equities benefited from the positive mood. The World Bank said global economic growth is likely to speed up this year to 3.1%, after a stronger than expected 2017. However, it remains concerned about the ability to sustain this growth in the longer term given the lack of improvement in productivity. Some countries, like China, which have fuelled global expansion, are also facing the challenge of a shrinking labour force as their population ages.

The weather worldwide, by comparison, has been doing strange things with a snow bomb cyclone in the USA, dangerous snowfall levels in the Alps and a record heatwave in Sydney. Bond markets suffered their own ‘bomb cyclone’ last week as 10-year yields spiked upwards. The Bank of Japan  scaled back the amount of monthly bond purchases it makes but has said it will continue its stimulus programme as long as needed. While inflation will likely dictate the path of bond yields, we are mindful that 2018 marks the tipping point away from central bank QE stimulus. The European Central Bank (ECB) indicated it was preparing to cut its crisis-era stimulus programme faster than expected. Another factor behind rising bond yields in the US was a story that China was considering slowing or halting purchases of US Treasuries but this was subsequently confirmed to be ‘fake news’ by Chinese authorities. However, there is ‘no smoke without fire’ so perhaps something the USA will need to consider in its political and trade relationship with China? Interestingly, the US 2-year Treasury yield moved above the S&P 500 dividend yield for the first time since 2008.

A research report indicated that the money flowing into UK assets from overseas investors is at a 40-year low because of Brexit and political uncertainty. The spectre of a Corbyn government and what that means for the UK economy and stock market continues to deter foreign investors. Last week’s accident-strewn cabinet reshuffle by PM Theresa May would not have helped this sentiment. While Mrs May left most of her senior ministers in post, Justine Greening quit rather than move from education while Jeremy Hunt refused to move away from health. The winter flu crisis in the NHS cannot be good for Theresa May’s standing amongst voters.

Sterling rose to a post-Brexit vote high of over $1.37 on media reports that the Finance Ministers of Spain and the Netherlands are considering a Brexit deal that keeps the UK as close to the EU as possible.

In the UK, the Halifax reported house prices increased by 2.7% in 2017 compared with 6.5% growth in 2016. During December prices actually fell by 0.6%, the first monthly decline since June. The Halifax currently estimates house prices will increase by between 0%-3% in 2018 given the shortage of properties for sale, low levels of new house building, high employment and low interest rates. Meanwhile, the Office for National Statistics reported that real household disposable income contracted by 1.6% in the annual period ended in Q3 2017. Meanwhile, there was a fall in construction activity, apart from house building in the three months to November but on a more encouraging note,  industrial output grew in November driven by manufacturing activity which saw the biggest increase since 2011.

In Europe, business confidence indicators were broadly above expectation and the highest level since 2000. In Germany, factory orders were marginally lower in November but annual growth remained about 9%. The European Central Bank (ECB) released notes from its latest policy meeting which suggested that a few of its members are pushing to review its position on forward guidance and perhaps reduce the overall asset purchase programme currently in place. The Euro hit its highest level against the US Dollar since 2014 on this and news that Angela Merkel’s conservatives and centre-left rivals have achieved a breakthrough in talks aimed at forming a new coalition government.

In the US, the producer price index reversed into negative, dropping by 0.1% in December. However, consumer price inflation recorded its biggest rise in 11 months in December.

In China, the central bank made a small change to how it manages Yuan fixing suggesting a greater control over the currency in future. Inflation also came in slightly below market expectation in December.

Finally, perhaps proof at last for those of you that think central bank QE programmes are completely bonkers? The European Central Bank (ECB) purchased bonds in Steinhoff International as part of its QE bond buying programme as these were rated investment grade quality. The South African retailer has seen its shares fall by 90% recently on news it is facing multiple probes into accounting practices. The ECB is reported to have sold its Steinhoff bonds as a result incurring a loss of €50m!