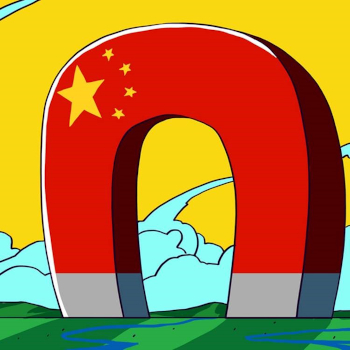 Rare earth metals are a highly coveted class of minerals that form key components in the production of smart phones, electric vehicles, wind farms and defence weapons. Around 80% of these rare earths are found and refined in China.

China has recently tightened its stranglehold on rare earths and potentially other scarce commodities. China passed draft legislation three years ago to control production and exports which was reviewed by the National People’s Congress at the end of last year with a view to implementation in 2021. The rationale appeared tied to the trade dispute with the US under Donald Trump’s presidency with a view to possibly disrupting US manufacturing and hurting the American defence sector.  China is now believed to be exploring limiting rare earth mineral supplies to US defence contractors, necessary for the production of F-35 fighter jets and other weaponry.

This has rung alarm bells in Washington and the Pentagon. Last week President Joe Biden signed an executive order to reduce US reliance on foreign imports of critical supply chains, including critical minerals. America is now trying to build up alternative supplies of rare earth minerals by backing exploration and mine development programmes, such as a titanium mineral sands project in Greenland.

Biden needn’t have to look too far – Canada has some of the largest known reserves of rare earth materials in the world along with the largest number of projects in the pipeline. Although it is decades away from commercial production.

The Chinese legislation is a major and serious threat to Western manufacturers who depend upon China’s raw materials and components. China may have been restricting the availability of key rare earth minerals already through the use of export quotas. At the same time, China’s domestic demand for rare earth metals is so great it can barely meet its own needs.

China’s move to ‘weaponise’ rare earth mineral exports is worrying for US and Chinese relations and could also throw a major spanner in the works of Western nations hoping to hit green economy targets.

The spectre of inflation driven by stimulus packages and economies unlocking on vaccine news dominated markets. The sell-off in government global bonds finally reached a point late last week where yields began to undermine overall equity market valuations, rather than just driving the ‘Great Rotation’ trade from growth to value.  Earlier in the week, Jerome Powell Chair of the US Federal Reserve (Fed) had attempted to calm the market with his monetary policy testimony. Investors will be looking for more potential interventions from central bankers, who may feel compelled to re-iterate their commitment to maintaining monetary policy support. In the UK, Andy Haldane, the Bank of England (BoE) economist said there is ‘a tangible risk UK inflation proves difficult to tame’ – not what government bond investors want to hear! However, Sir David Ramsden, Deputy Governor of the BoE said that ‘rising yields represent good news on the economy’.

PM Boris Johnson revealed England’s re-opening plan which was pretty much in line with previous ‘leaks’ to the media with schools opening 8th March, non-essential retail opening 12th April and an end to all social contact rules by 21st June. There was even a hint towards vaccine passports with the possibility of international travel from mid-May.

While the exit from lockdown will be gradual and measured there was encouraging vaccine data.  The Covid-19 vaccines being used in the UK could reduce a person’s risk of being admitted to hospital significantly. A study by scientists of hospital admissions in Scotland showed that four weeks after receiving the Astra/Oxford initial dose, the risk of being admitted to hospital was reduced by 94%, while for those who received the Pfizer jab it was 85%. Public Health England also conducted a study which showed the Pfizer vaccine jab reduced the chance of catching the virus by 70% and the risk of hospitalisation and death by over 75%.  The number of people vaccinated in the UK climbed to over 20million. Against these positive developments was news that 6 people had been discovered to have had the Brazilian variant in February although the race is on to find one traveller who remains unidentified.

The Johnson & Johnson/Jansen single-shot vaccine has been found to be safe and effective and has been authorised for use in the US imminently. Elsewhere, the WHO Covax vaccine sharing scheme to provide protection from Covid -19 to poorer nations made its first delivery with 600,000 doses of the Astra-Zeneca jab to Ghana. The global challenge is however reflected by the fact that Ghana’s population is over 17million. The Covax scheme has so far raised $6bn but needs a further $2bn to meet its 2021 vaccination goal.

In the UK, Chancellor Rishi Sunak will update his Plans for Jobs in the Budget this week with the furlough scheme likely to be extended. He is also expected to extend the stamp duty holiday on housing transactions by three months. The UK’s finances have taken a body blow from Covid-19 however the government appears to be taking the view that the vaccine driven economic re-bound in economic activity in the second half of 2021 will be sufficient to start repairing the hole and buy some time before taking tougher decisions on tax. Longer-term corporation tax increases appear a certainty and weekend reports suggest income tax allowances are likely to be frozen.

In Europe, The February IFO survey suggested the German economy is looking towards recovery again and order books are well filled. European Central Bank President Christine Lagarde suggested the central bank is ‘closely monitoring’ the recent rise in Eurozone sovereign yields which was interpreted as hinting at an extension of asset purchases – even more QE! Meanwhile, Astra Zeneca said that its EU supply chains would only be able to deliver half of an expected supply of Covid-19 vaccine to the bloc in the second quarter but would look to make up the shortfall from elsewhere. Meanwhile, media reports suggest 80% of the EU’s 6million Astra-Zeneca vaccine jabs are still sitting in unused stockpiles!

In the US, Fed Chair Jerome Powell commented on the steepening of the yield curve. He implied that the rise in long-term bond yields was a vote of confidence in the US economic recovery, rather than reflective of a worrying increase in inflation expectations. US President Joe Biden called on the Senate to quickly vote on his $1.9trillion pandemic relief bill after the proposal passed the House of Representatives. US consumer confidence edged up in February with consumers remaining cautiously optimistic about the outlook for the coming months.

In China, February manufacturing activity recorded the weakest reading since May although was likely impacted by the timing of the new year.

Brent oil moved above $67 early last week, on vaccine news and hope of higher global economic activity in the second half of 2021 before slipping to $65 as bond yields rose.

Finally, the war of words over bitcoin continues. Elon Musk’s Tesla is reported to have made a ‘paper profit of $1bn from its recent investment in the crypto-currency – more than from recent sales of its cars! However, US Treasury Secretary Janet Yellen appears to be no fan of bitcoin which she has described as an ‘extremely inefficient’ payment mechanism. Meanwhile, Microsoft founder Bill Gates urged people to ‘watch out’ if investing in bitcoin. The bitcoin price jumped 50% in the weeks after Tesla invested but has dropped 18% since Yellen’s comment.