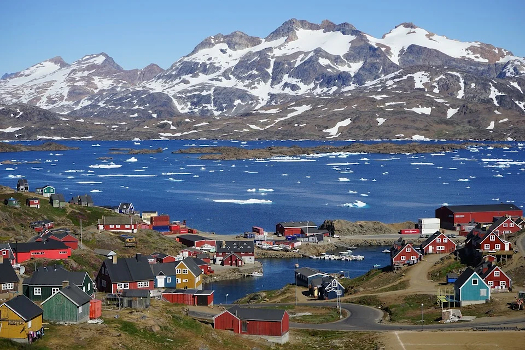 Greenland is the world’s largest island and has a population of just 56,000. The island hit the headlines in 2019 when President Donald Trump suggested that the US could buy it! Denmark, dismissed Trump’s idea as ‘absurd’ – So did many others!

Greenland has attracted international interest because of its rare earth mineral assets. A potential mine at Kvanefjeld, in the south of the country could become the most significant western world producer of rare earth minerals. This is claimed by the sites owner’s, an Australian company, Greenland Minerals. Unfortunately, the news has resulted in the shares being suspended.

Greenland’s main opposition party has recently won an election which could have major consequences for international interests in the Arctic. The left-wing Inuit Ataqatigiit, which opposes the Kvanefjeld mining project, secured 37% of votes. The pro-mining social-democratic Siumut party came second, having been in power for all but four years since 1979. The Inuit Ataqatigiit, an indigenous party with a strong environmental focus, is now seeking to form a government. Leader Múte Egede, has gone as far as stating, ”Kvanefjeld – It won’t happen.”

The Siumut party had argued that the development of Kvanefjeld would create hundreds of jobs and generate millions of dollars annually over many years, which could lead to greater independence from Denmark. Clearly, local voters would appear to have been more concerned about the potential radioactive pollution and toxic waste.

The US may be disappointed by the outcome of the election as it no doubt has looked at Greenland to reduce its dependency upon China for rare earth minerals. China has been restricting the availability of rare earth minerals through the use of export quotas but more recently has explored restricting supplies to US defence contractors. There are also reports that China is now thinking about controlling the price of some commodities such as copper and iron ore!

Record highs for the US market and the UK FTSE 100 back above 7000 for the first time since October 2019 on an encouraging first quarter results season in the US and positive global economic data. The Chinese economy rebounded strongly in the first quarter driven by retail spending. This is an interesting read-across for the UK which is coming out of lockdown. Indeed, one report over the weekend suggested that globally, consumers may have amassed $5.4trillion in savings during lockdowns due to an inability to spend. The release of pent-up demand should drive a bounce in global economic activity in the second half of 2021.

While the UK gradually emerges from lockdown, elsewhere the Covid-19 pandemic remains challenging with Brazil and India in particular continuing to make all the wrong headlines. Meanwhile, Europe passed the grim milestone of 1million Covid-19 deaths. The effectiveness of vaccines to deal with Covid-19 variants continues to focus minds with the Indian variant the latest cause for concern with 77 cases identified in the UK. Do we need to get more worried about the South African and Indian variants? The question of course is dependent upon how much protection the current vaccines give against these new variants.

An Israeli report suggested the Pfizer vaccine might not give as much protection against the South African variant of Covid-19 as originally thought. Meanwhile the Chinese Centre for Disease Control & Prevention acknowledged concerns about the effectiveness of the Sinovac Biotech vaccine which appears to have shown efficacy of just over 50% in Brazil. Chile has had to impose new lockdown measures after a what was thought to be a successful mass vaccination programme but based on the Chinese Sinovac vaccine. China has not, so far, published phase III trial data for its Covid-19 vaccines. Ireland became the latest country to recommend the Astra Zeneca vaccine be limited to those aged over 60. In the US, the health regulator has recommended pausing the Johnson & Johnson/Janssen jab while a review is taken following reports of a number of rare blood clots in a handful of people who were vaccinated. The US, EU and South Africa have all halted vaccination with the J&J vaccine for the time being. On a more positive note, the Moderna vaccine has started to roll out in England while over-45’s, have been invited to book a jab. Some 32.8million people have now received a first vaccine jab in the UK and 9.9million have had a second jab.

The UK economy grew by 0.4% in February with manufacturing output up by 1.3% after January’s drop. This swing seems related to the end of the EU transition period and car production, a key export rebounded strongly in February. UK economic growth is tracking ahead of the Office of Budget Responsibility (OBR) forecasts, as the impact of the first quarter lockdown has been less severe than expected. Trade figures for February showed a strong recovery in exports to the EU. The initial disruption from the new post-Brexit trading relationship with the EU does appear to be easing. The British Retail Consortium reported higher spending in March compared with a year earlier and before the start of the Covid-19 pandemic. Sales were also up by 8% on March 2019 while the high street should receive a boost from the end of non-essential lockdown from 12th April. Rightmove also reported a buoyant UK housing market with asking prices up 2.1% in April -the largest monthly move in more than 5-years.

In Europe, President of the European Central Bank (ECB) Christine Lagarde suggested that the Eurozone economy remains reliant on the ‘two crutches’ of fiscal and monetary stimulus, hence it is too soon to remove either support.

In the US, James Bullard a member of the Federal Reserve (Fed) suggested that when 75% of the population is vaccinated that this might trigger the central bank’s debate about tapering its QE stimulus. Based on current vaccination rates in America this could be during the third quarter of 2021. Markets sometimes become edgy when bond tapering is in prospect. A survey of global fund managers suggested that US 10-year Treasury yields would have to hit 2.1% before threatening an equity market correction. US CPI increased at an annualised rate of 2.6% in March, the largest headline gain in inflation since August 2012 although this appears mainly due to higher gasoline prices. US retail sales volumes recovered strongly in March as households received additional pandemic relief payments, vaccine distribution accelerated and the weather improved.

Japan’s exports were 16% higher in March helped by the strong economic recovery in China. Exports to China, Japan’s largest trading partner were up by 37%.

China’s economy is estimated to have grown by 18.3% in the first quarter of 2021 driven by much stronger retail sales. The economy rebounded strongly against the previous year comparative period which saw the imposition of strict lockdowns. China’s trade figures for March showed a 31% increase in exports although this was slightly below expectations with imports up by 38%. The Chinese authorities are reported to be considering taking action to prevent the Chinese economy from over- heating. In addition. China is believed to be considering controlling some commodity prices such as copper and iron ore due to concerns about inflationary pressures. China accounts for 73% of all seaborne iron ore trade so not good news for the iron ore miners or Australian economy if it goes ahead.

Brent oil edged up to $66 on positive global economic data and after Houthi rebels from Yemen claimed yet another attack on Saudi Arabia’s oil facilities.

Finally, the world remains a dangerous place – Taiwan said a record number of Chinese military jets had flown into its air space last week, Russia has been massing troops in Russian-annexed Crimea prompting defensive measures in Ukraine, while Iran has said it will retaliate after a cyber-attack, reported to have been carried out by Israel, on its nuclear facility in Natanz. Markets appear sanguine about these developments and are likely to remain so as long as nobody gets trigger happy!

Read Last Week’s Alpha Bites – Everything Remains on the Table