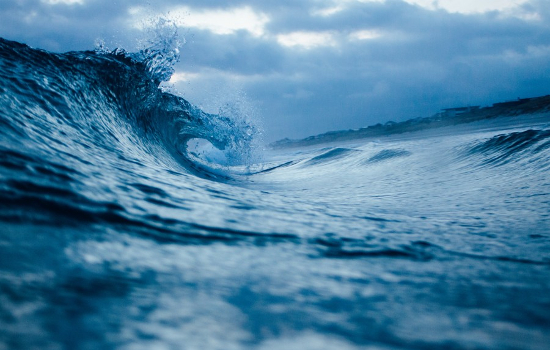 Once dismissed as a nautical myth, rogue waves that can be as tall as a ten-storey apartment block have been accepted as a leading cause of large ships sinking. In 1995 the cruise ship Queen Elizabeth II was hit by a 29-metre high rogue wave which the Captain Ronald Warwick described as ‘a great wall of water. It looked as if we were going into the White Cliffs of Dover’.

European Space Agency satellites have helped establish the widespread existence of these rogue waves. The UK’s National Oceanography Centre estimates that one in 10,000 waves is a rogue wave. However, due to climate change, winds are increasing over the oceans and stronger winds are likely to create more and bigger waves, some of them rogue waves.

Are global stock markets and currencies becoming vulnerable to rogue computer driven selling waves? The growth of algorithmic computer driven trading programmes has been largely responsible for a number of flash crashes. The most obvious occurred at 2.32pm on 6th May 2010 which lasted about 36 minutes and saw a massive drop in the US indices. New regulations were put in place subsequently, but a smaller flash crash happened on 24th August 2015.

Last week, in the UK, one of the country’s most high-profile stock pickers, Neil Woodford was forced to suspended trading in his largest fund following a large wave of sellers. This would appear to have followed a prolonged period of underperformance by the fund relative to its peers. This could well prompt a large wave of complaints given the fund’s exposure to illiquid stocks. The head of the Financial Conduct Authority, Andrew Bailey has suggested fund rules may need amending.

Some government bond yields touched new all-time lows as trade tariffs continued to overshadow global economic growth. Markets are once more looking to central bankers for support. The futures market is now pricing in a 75% chance of an interest rate cut by the Federal Reserve by July and a 95% chance of a cut by September. Global manufacturing activity contracted in May which central bankers will have noted. Australia and India’s central banks cut interest rates last week. Meanwhile, Chair of the US Federal Reserve Jerome Powell subtly shifted his characterisation of interest rate policy from ‘patient’ to ‘appropriate’. Investors read this as a sign that a continuing trade war would lead to an early US interest rate cut. Weak US jobs data added to hopes of a cut.

Turning to US/China trade tariffs, last week saw China talking about creating a list of ‘unreliable’ entities that are damaging the interests of their domestic companies. Meanwhile, the US Treasury Department issued a statement re-iterating their view that it was China that backpedalled on prior elements of a trade agreement.  Meanwhile, China’s president Xi Jinping has visited Russia and called President Putin his ‘best friend’. Moscow Zoo has been given two pandas while Huawei has signed a deal to develop 5G in Russia.

The Trump administration reached agreement with Mexico over the weekend on immigration which will see the country’s national guard deployed to patrol the border. President Trump announced the withdrawal of the initial 5% tariff on Mexican imports.

In its latest report, the International Monetary Fund (IMF) warned that Italy’s debt represents a major risk to the eurozone economy. The IMF also thinks the risk of the UK crashing out of the EU without a Brexit deal is a key risk, because many economic sectors are still not prepared for such an eventuality. The IMF also trimmed China’s economic growth forecasts amid rising trade risks.

The UK manufacturing sector contracted in May as stockpiling ahead of Brexit eased. This has been most pronounced in the car manufacturing sector. Exports fell the most in five years as overseas customers apparently shifted supply chains away from the UK. Construction activity also contracted in May as Brexit continued to overshadow the sector. However, activity in the service sector gained a little momentum in May. Taken together, activity across manufacturing, construction and services suggests sluggish economic growth is likely in the second quarter.

In Europe, there was concern that Chancellor Angela Merkel’s coalition government could collapse after the leader of the partnering SPD resigned over the party’s poor performance in the EU elections. The shock waves from the EU elections continue to spread with the EU concluding that Italy is in breach of its fiscal rules and threatening to put Italy into the EU Excessive Deficit Procedure. The willingness of Italy’s populist coalition government to compromise before the summer would appear doubtful setting the stage for a potential clash in the autumn.  Turning to interest rates, the European Central Bank (ECB) has pushed back guidance on the expected timing of its first increase from the end of 2019 to mid-2020. The ECB has also indicated that it is ready to act in case of adverse contingencies with a possible interest rate cut, re-starting QE or a further extension of forward interest rate guidance.

The Reserve Bank of Australia announced a 0.25% interest rate cut which, given weak inflation and declining house prices in the main cities, certainly appears justified.

Despite concerns about trade tariffs and global economic growth Brent oil rallied to $63.

Finally, a medieval chess piece that was missing for almost 200 years had been unknowingly kept in a drawer by an Edinburgh family. The long-lost Lewis chessman could be worth £1m at auction.