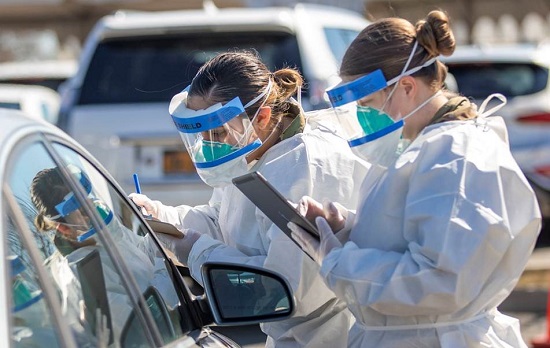 The next 7-10 days are going to be very painful for many families as we approach the Covid-19 peak. In the UK, the ‘three- week’ lockdown will, this week, be extended but without clarity on when we might expect a relaxation. However, the government has talked of a three- month fight and signalled up to six months of social distancing measures being required.

Markets are largely pricing in three-months of lockdown pain, but the million- dollar question is how soon does life return to normal? Clearly, herd immunity will take effect and a vaccine may become commercially available next year, but measures will have to stay in effect to protect the NHS/care system to prevent flare ups. Fighting coronavirus will be like a forest fire -once you have tackled it – further dampening down is required to stop sparks and embers starting a new smaller pocket of fire.

The key must surely be the ability to test for coronavirus so that key workers and their families who keep the country running (nursing, food, utilities, logistics) are screened first. Some control on movement is going to be required be it through smartphone tracking or identity passes, or will the government trust us all to use common sense? Given the small minority of ‘Covid-iots’ who have flouted social distancing guidance some suggest German-style immunity certificates may be required. Vigorous levels of tracing people who have come into contact with those who have tested positive for Covid-19 and quarantining them still appears key.

The problem the UK faces is that we don’t have enough test kits yet even for our healthcare staff on the front line. The government has pledged to raise testing levels to 100,000 a day by the end of April. This however includes both swab and anti-body testing. Testing is vital for our NHS and care workers but it also remains the key to the UK’s coronavirus lockdown exit strategy. There are over 31 million workers, in the UK, so to test just them at that rate would take the greater part of a year unless testing capacity was ramped up materially. Covid-19 is proving a real test for the government.

Markets rallied last week as tentative signs of a slowdown in the mounting death toll from Covid-19 crisis and on hopes that the peak of new cases might be in sight, although the situation remains mixed country-by-country. In China, there were no new deaths reported for the first time. In addition, Wuhan came out of lockdown, albeit the BBC reporting team had to undergo three temperature checks and was sprayed with disinfectant twice before being allowed to broadcast! So, not back to normal just yet. While Wuhan has emerged from lockdown both Hong Kong and Singapore have had to tighten lockdown measures to stop any resurgence in new infections. In Europe, Italy and Austria, are re-opening some shops. Meanwhile, Spain’s prime minister Pedro Sanchez said the country was close to passing the worst of its Covid-19 outbreak, ‘The fire starts to come under control’ and is re-starting construction and factory work. In the US, the death toll surpassed 23,000, by far the worst-affected country but President Trump said ‘It looks like we’re plateauing and maybe even in some cases coming down.’ As countries are in different stages of the Covid-19 outbreak, debate is raging over whether to return to normal life and possibly risk a second wave of infections.

The economic cost of Covid-19 is truly staggering. The United Nations estimates that four out of five workers worldwide have had their jobs affected by Covid-19 lockdown measures.

In the UK, one economist forecast that the economy could contract by over 15% in the second quarter due to the Covid-19 lockdown. Reflecting the Covid-19 disruption, new car registrations for March, usually one of the busiest months, dropped by 44%. The Resolution Foundation estimates more than 9 million UK workers could be furloughed under the government’s job retention scheme. The estimated cost to the taxpayer could be between £30bn-£40bn.

In Europe, eurozone finance ministers were finally able to find some common ground and put together another stimulus package worth €560bn. However, disagreement between member nations over the financing continued over the weekend. Italian PM Conte attacked the scheme as inadequate, specifically criticising the opposition to his plan to issue common debt or a ‘corona-bond’. The opposition to this appears to come from Germany which is reluctant to bail out its southern European partners following the previous financial crisis.

In the US, weekly jobless claims were much higher than expected at 6.6m taking the three-week total to over 17m or 10% of the US workforce -a truly staggering level. However, the Federal Reserve, ‘a bit like the cavalry in a western’ came riding to the rescue announcing an extension of its lending facilities to $2.3trillion expanding efforts to support small and mid-size companies as well as cities and states. Turning to the US presidential election race, Bernie Saunders dropped out of the race for the Democratic nomination leaving Joe Biden to go head-to-head with Donald Trump later in the year.

Following a spike in new Covid-19 cases, Japan declared a state of emergency and is now looking at an additional $1trillion stimulus package.

China’s trade data for March revealed a 7% fall in exports and 1% drop in imports. While the data is not as bad as feared, the current lockdowns in Europe and the US suggest the headwinds to exports will continue.

Brent oil firmed modestly to $32 as OPEC+ agreed to reduce oil output by 9.7million barrels a day or 10%. Despite President Trump’s enthusiasm for the production cut oil traders appear unconvinced that the Covid-19 driven slump in oil demand can be fully offset, even by the biggest ever agreed cut in output.

Finally, in summing up where we are in the fight against Covid-19 and the exit from lockdown we turn to Winston Churchill. ‘Now is not the end. It is not even the beginning of the end. But it is, perhaps, the end of the beginning’. While cognizant of the many implications of the Covid-19 crisis will have in the long-term, we believe uncertainty and fear may have peaked, which marks the first step on the road to recovery.