The Caspian Sea – Agreement, at Least on the Surface 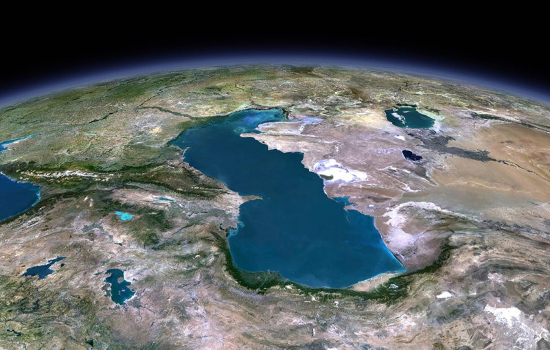 Despite the term ‘sea’ being used in its name, the Caspian Sea is the world’s largest inland body of water and technically a salt water lake. Home to the sturgeon and producing between 80%-90% of the world’s caviar, the Caspian Sea is also highly-prized for its vast oil and gas reserves, estimated to be 50 billion barrels of oil and nearly 300 trillion cubic feet of gas.

An agreement 22 years in the making – Russia, Iran, Azerbaijan, Kazakhstan and Turkmenistan – all bordering the Caspian Sea – have agreed in principle how to divide it up. It is an important step in easing regional tensions.

For years Iran has argued the Caspian Sea was a lake and not a sea. Why is this important? A sea would be covered by United Nations Law of the Sea, whereas a lake could be divided equally between all five countries. The new agreement gives the Caspian Sea, a ‘special legal status’, which means it is not defined as a sea or a lake! The agreement takes a compromise approach, treating the surface as international water (i.e. a sea) and dividing the seabed into territorial zones, along the lines of a lake. Although further talks will be necessary to divide up the seabed’s resources.

The agreement would appear to reaffirm Russia’s geopolitical dominance in the region. How long before President Trump slaps a tariff on caviar?

The spotlight remained focused on Turkey with markets monitoring developments although risks of contagion in other emerging markets and the European banking system appear to have been priced in for the moment. However, thoughts turned to trade tariffs and soft Chinese economic data. Copper, a good bellwether of economic activity continued to fall and is now some 20% below its peak in May, while the stock markets of emerging economies, which includes Turkey entered ‘bear market’ territory with a fall of 20% from their previous high.

A monthly survey of global fund managers revealed a cautious picture due to uncertainty about trade tariffs with portfolio cash balances currently above the long-term average. In addition, the UK suffered the largest single-month decline in global fund manager asset allocation since May 2016 due to uncertainty about Brexit. However, it is worth remembering the UK economy is not the UK stock market and weak Sterling is good news for many of the UK’s quoted companies which export or have sizeable oversea earnings. Sterling remained below $1.28.

In the UK, unemployment fell to its lowest level since 1975 while the number of EU nationals working in the country dropped by a record amount. However, annualised average wage growth over the last three-months dipped from 2.5% to 2.4%. The CPI measure of inflation edged up slightly in July to 2.5%.

According to Rightmove, the average listed UK house price declined 2.3% compared to last month, with London, in particular, seeing a 3.1% fall in asking prices. As sellers outnumber buyers in the peak summer holiday month, the decline is not uncommon; however, it represents a deterioration in relative terms compared to August 2017. As lending criteria continues to tighten and buyer affordability becomes a concern, the outlook for house prices remains challenging.

In the US, Wall Street is set to achieve on Wednesday its longest bull market in history – the longest period of rising markets without a 20% fall. This is taking place amidst a number of well-known concerns affecting global markets, including a financial meltdown in Turkey, a sell-off in emerging markets, a brewing trade war and a number of geopolitical tensions triggering economic sanctions.

Brent oil hovered around $72 on OPEC production data. This showed a slight tick up in output in line with the earlier agreement, but interestingly output from Saudi Arabia was slightly lower.

Finally, following his increasingly erratic outbursts, Elon Musk has outlined plans to take Tesla private and said he has discussed financing with Saudi Arabia. Contrary to earlier press reports which suggested it would be the largest ever de-listing at $70bn, he has said that he needs to raise about $23bn, as he only intends to buy out shareholders who no longer want to own Tesla shares. Some investors have filed a lawsuit claiming he misled the market having tweeted ‘funding secured’ while the SEC is also investigating the matter. An investment in Tesla by Saudi Arabia may be a long-term hedge against any decline in oil demand from the growth of electric vehicles.