The Eagle, the Bear and the Dragon 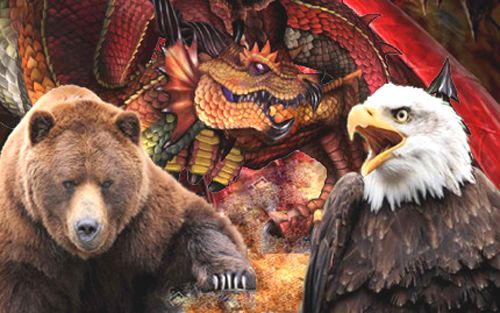 The White House is becoming increasingly wary of ever closer ties between Beijing and Moscow.

Regardless, China’s premier will have been surprised and concerned that Russia’s invasion has gone so awry. Furthermore, it has strengthened the US/NATO alliance, bolstering defence spending while the imposition of the most punishing sanctions ever inflicted on any country must hopefully be food for thought, given China’s ambitions regarding Taiwan.

Matters have been further complicated by Putin’s request from China for military aid, particularly drones. China has called this “disinformation”. President Joe Biden has called President Xi Jinping and warned of ‘consequences’ should China provide military aid. Putin need Chinese banks and companies to help Russia circumvent sanctions. Will China use its influence over Russia to try to broker peace or will it provide military aid? China has so far abstained in a UN vote on the invasion and has refused to condemn it.

As with the US withdrawal from Afghanistan, China looks to be well placed to exploit the situation to its benefit. Afghanistan fits in China’s Belt & Road Initiative while Russia is rich in key commodities -oil, gas, copper, nickel, palladium. Russia is already offering India discounted oil so it’s likely that China will no doubt be watching this closely. Buying energy and commodities at a discount when western competitors are paying record prices will further enhance China’s competitive position. China is already ahead of the US in the adoption of 5G technology and securing key commodities is vital.

Given Europe is a major export market for China, then it will not want prolonged conflict adversely impacting economic growth in this region, even more so now its own economy is slowing due to Covid-19 lockdowns.

However, China will no doubt see the conflict as very advantageous in terms of securing key commodities. The foreign ministers of China and Russia met last week and Wang Yi said that China is ready to take their relationship into ‘to a higher level in a new era’.

Russia/Ukraine peace talks in Istanbul and oil prices, which are dictating global risk appetite. Investors also appear to be fretting about the implications of yield curve inversion (shorter-dated bonds pay a higher yield than those with a longer maturity) in US Treasuries – historically an indicator of US recession. However, a leading member of the Federal Reserve rightly pointed out that a history of correlation with US recessions should not be mistaken for causation. Inflation and interest rates are the other main focus. In the US, forecasters seem to be reaching agreement on predicting a number of 0.5% interest rate hikes to be delivered by the Federal Reserve at each of its next few meetings. Meanwhile in the UK, interest rate futures are currently evenly divided between a 0.25% and 0.5% interest rate hike at the next Bank of England meeting in May.

Peace talks resumed, but Russian Foreign Minister Sergei Lavrov said that a meeting between President Vladimir Putin and Volodymyr Zelensky right now would be ‘counterproductive’. Ukraine laid out plans to become a neutral state in exchange for security guarantees while Russia said it was going to pull back its forces from Kyiv and Chernihiv, but it is not clear whether this is by choice or necessity! Based on previous form, Russia will be judged by actions not words. A peaceful solution still rests solely with President Vladimir Putin who somehow needs to engineer something that he can claim to be a victory, even though it would be a complete and utter failure against the original objective. Significantly, Putin has said that the shelling of Mariupol will only end when Ukrainian troops surrender.

In the UK, consumer confidence has dropped sharply as a result of higher inflation. A survey asking consumers about their mood regarding their finances highlighted a drop in sentiment to the lowest level since the first Covid lockdown. Although the UK is less exposed to Russian gas and trade, inflationary pressures remain. The extent to which increased savings built-up during the pandemic will be sufficient to offset the cost-of-living crisis remains a topic of debate.

European Central Bank (ECB) President Christine Lagarde acknowledged that the downside risks to the Eurozone’s economic outlook have intensified since the last ECB meeting. The ECB also expressed confidence that the upward pressure from food and energy prices should soon ease – are they on the same planet as the rest of us?  In the meantime, inflation estimates hit 9.8% in Spain and 7.6% in Germany. More recently, ECB board member Isabel Schnabel indicated that focus in the near-term will remain on anchoring inflation, potentially raising rates some time after winding down its bond purchase programme in Q3.

In the US, we have witnessed an inevitable yield curve inversion (with the 2-year yield rising above the 10-year yield). Given the extraordinary level of inflation (approaching 9% in the US), and the extent to which some of this has been driven by supply-side factors, we need to be careful when comparing the current situation to past instances of curve inversion. More aggressive rate hikes are expected from the Fed, yet longer term expectations for inflation remain at around 2%, suggesting this rate hiking cycle will be fast, but short-lived. Meanwhile, the US labour market remains strong, with the unemployment rate declining further to 3.6%.

China’s inter-bank funding costs continued to drop as the central bank injected fresh funds into the banking system. The central bank support comes as China continues to deal with the largest Covid-19 wave since Wuhan, with Shanghai now in a two-stage lockdown. In addition, worries about China’s  property development sector continue as Sunac, China’s third largest developer said it will be unable to meet its reporting deadline. China’s official business activity PMI indicators for the manufacturing and service sectors both dipped into contraction territory (below 50) in March reflecting Covid-19 lockdowns.

Covid-19 lockdowns in China and hopes of progress in Russia/Ukraine saw Brent oil drop back closer to $100. The Biden administration is also reported to be considering the largest-ever release of oil from the US Strategic Petroleum Reserve.  Meanwhile, OPEC+ agreed to slightly increase output to 432,000 barrels of oil a day from May, although some members have struggled to meet their production quotas.

Finally, desperate times call for desperate measures. In an effort to support its currency, President Putin has said he wants ‘unfriendly’ countries to buy Russian gas with roubles. Germany, which gets half its gas from Russia has already declared an ‘early warning’ over possible gas supply disruption. Not surprisingly, gas prices are starting to rise once again. Russia is also reported to be considering ‘friendly’ countries such as China and Turkey being allowed to buy oil and gas with Bitcoin.