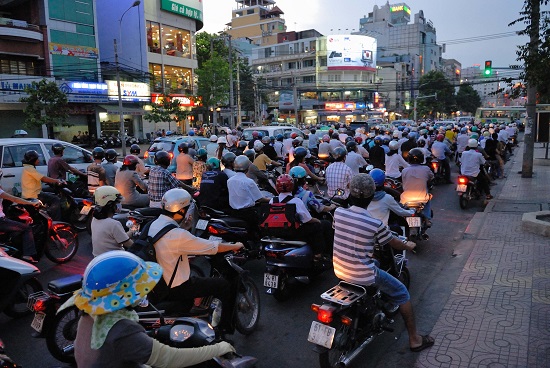 Sadly, there currently appears to be no end in sight for the war in Ukraine.

Many, at the time, may have thought the same about the Vietnam War. Yet approaching 50-years later and Vietnam is now seen as an opportunity for many businesses to invest in and to enter the South East Asia region with its rapidly expanding and more affluent population.

Trade wars, Covid-19 lockdowns and supply chain disruption have made many companies re-assess their manufacturing footprint, particularly American businesses. Some are re-onshoring production to the US while others are seeking an alternative to China. It looks as if Vietnam could be well positioned, given its proximity to China, as well as other countries in South East Asia.

Vietnam is a socialist-oriented market economy. It has a population of 100million, has relatively low labour costs, political stability, investor-friendly policies and improving infrastructure. It is also a party to thirteen free trade agreements, making it one of the most open economies. South Korea remains one of the largest investors in Vietnam, followed by China and Japan. However, American and European businesses are stepping up investment in Vietnam which in turn is leading their suppliers to set up there as well. For example, local media estimates that about 30% of Apple’s AirPod earphones are made in Vietnam.

Russia’s invasion of Ukraine has exacerbated global supply chain disruption, which had already been struggling to cope with the release of pandemic pent-up demand. As China exits lockdown and more capacity comes onstream, global supply chain pressure should start to ease. However, the days of un-encumbered globalisation appear over and more companies will be seeking to ensure the production of key components is as secure as possible.

As global manufacturing re-pivots, Vietnam is shrugging off the effects of Covid and the economy is back on a growth trend. Could Boris Johnson say the same for post Brexit Britain? What will be his lasting legacy?

Markets continued to assess the pace of interest rate hikes from central banks following weaker PMI business activity indicators. The European Central Bank (ECB) made it clear that its decision about another interest rate hike in September will be economic data dependent. Meanwhile, the US Federal Reserve is due to hike interest rates later this week although futures are now pricing in a 75% chance of a 0.75% hike. This followed the publication of the S&P Global US flash PMI for July which fell into contraction territory prompting a more ‘dovish’ shift in interest rate expectations.

A US National Security spokesperson warned that Russia intends to fully annex those parts of Ukraine it already controls in a repeat of its strategy with the Crimea in 2014. Russia and Ukraine signed a deal to enable shipments of grain. However, within less than 24-hours Russia hit the port of Odessa with 4 cruise missiles! This, together with record temperatures across Europe, which will hit crop yields, suggest the risk of higher food prices remains.

The supply of Russian gas through the Nord Stream 1 pipeline resumed last week after a 10-day shut down for maintenance. However, ominously, Putin warned that gas volume supplied through the pipeline could drop to 20% of normal capacity without the installation of a new turbine from Siemens which has been held up by Western sanctions. Reports suggest that the pipeline is currently operating at 40% capacity. Meanwhile, the EU is proposing an emergency mechanism to shut down non-essential industries that use gas to lower demand and has urged countries to cut gas demand by 15% over the next seven months.

In the UK, once again, CPI inflation increased ahead of expectations, increasing to 9.4% in June reflecting higher petrol prices. RPI inflation reached 11.8%!  Bank of England governor Andrew Bailey suggested a more aggressive 0.5% interest rate hike to 1.75% could now be likely next month. The BoE has a real challenge on its hands with more workers demanding higher wage settlements. A number of public sector workers are threatening strike action over the summer along with a growing number in the private sector, with Royal Mail workers the latest. Meanwhile, the UK labour market remains tight for employers although at least is no longer tightening.  The flash composite PMI business activity indicator for July slipped to a 17-month low of 53.7 consistent with sluggish growth.

The Conservative leadership contest rumbled on and both the remaining candidates -Rishi Sunak and Liz Truss will inherit an additional challenge due to inflation. Public sector borrowing, while lower than last year was well above the Office of Budget Responsibility’s forecast in June. Debt interest costs hit another new record of £19.4bn driven by inflation linked gilts.

In Europe, the ECB announced a larger than expected 0.5% interest rate hike in an attempt to dampen inflation. The decision about another increase in September will be economic data dependent. In the press conference, ECB President Christine Lagarde said ‘we are definitely on a normalisation path in order to reach our medium-term objective of 2%.’ However, she declined to answer any question on the Italian political crisis. Eurozone business activity unexpectedly contracted in July due to an accelerating downturn in manufacturing and a near-stalling of service sector growth. The flash PMI business activity indicator dipped into contraction territory at 49.4.

Brent oil was steady at $102 as President Joe Biden’s trip to Riyadh yielded little tangible by way of results with Saudi Arabia, suggesting that only a limited increase in oil production was possible.

Finally, another sign of how times change. Amazon, is planning to create 4,000 new jobs in the UK which would bring its staff numbers up to 75,000 making it one of the UK’s top ten private sector employers. Furthermore, it estimates it supports an additional 250,000 jobs via small companies that sell on Amazon. Mind you, didn’t Napoleon Bonaparte once call England ‘a nation of shopkeepers?’