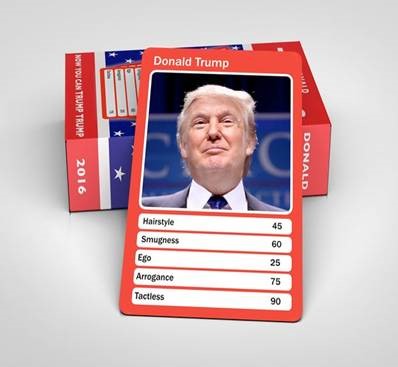 Top Trumps may be fondly remembered from its original heyday in the playgrounds of the 1970’s and 1980’s.  In the digital era, how has the game ensured its longevity?

It appears to have attracted young players by offering a broad range of popular subjects from volcanoes and dinosaurs to bugs and predators. It has further enhanced its appeal by securing the rights to popular brands such as Horrible History, Disney, Star Wars, Marvel and Harry Potter.

Stock markets are currently watching the US play ‘Trade War Top Trumps’ with China. The US has the biggest trade deficit with China, but the latter has been the biggest buyer of US Treasuries. President Trump is head of the biggest economy in the world, but President Xi Jinping will remain in power longer than his rival.

President Trump has also been playing ‘Nuclear Weapons Top Trumps’ with Kim Jong Un. Trump successfully played the ‘my red button is bigger than yours’ card. The North Koreans are reported to be interested in holding talks about denuclearisation.

In the meantime, he has started playing a game of ‘Syria Top Trumps’ with Russia. He first played ‘the missiles are coming’ card and Russia countered with, ‘we will shoot all missiles down’. Over the weekend he played the ‘105 targeted missile strike’ card and appears to have won the hand with ‘mission accomplished’.

Donald Trump has so far played some high scoring cards. However, the Syria crisis is far from over and just how the game develops with North Korea and China remains to be seen.

The threat of potential trade wars as well as America and Russia preparing for conflict with each other in Syria. Presidential tweets hardly helped to calm investor nerves, albeit the targeted missile strikes on Syria over the weekend appear to be the extent of action for the time being.  Uncertainty weakened the US Dollar with Sterling at $1.425 although this in turn acted as a dampener on the UK stock market which has a high proportion of overseas earners. US/China trade war uncertainty has hit other parts of global currency markets. For example, the Hong Kong Dollar dropped to its lowest level in thirty-five years.

China and US trade remained in focus with announcements from each side sounding a bit more conciliatory. China’s President Xi seemed to strike a conciliatory tone last week saying that China ‘will enter a new phase of opening up’ in sectors such as financial services and automotive manufacturing, including ‘significantly lowering the import tariff for vehicles’. President Trump noted the US will ‘probably’ do a deal with China and said ‘very thankful for President Xi’s kind words on tariffs and automobile barriers, we’ll make great progress together’. In the meantime, China’s trade surplus with the US expanded by over 19% in the first quarter of 2018.

China has also approached the World Trade Organisation for dispute settlement over US tariffs imposed on imports of steel and aluminium.

While trade issues have focused on China, President Trump has also been trying to re-negotiate the NAFTA trade deal with Canada and Mexico. The Mexican economy minister has said that while a deal is still weeks away, that ‘there’s a very high probability, about 80%, that we reach an agreement in principle’. President Trump said ‘we are fairly close on NAFTA’.

Further geo-political uncertainty arose following a suspected chemical attack in Syria. Russian equities fell over 8% and the Rouble by 4% the day following a double whammy of fresh punitive US sanctions and President Trump tweeting ‘President Putin, Russia and Iran are responsible for backing Animal Assad. Big price to pay’. Further Trump tweets made markets uneasy warning ‘the missiles are coming’ and Russia countered that it will shoot down missiles or US aircraft attacking Syria. This raised the prospect of conflict between the US and Russia in Syria. In the event, the 105 targeted missile strikes would appear the end of the matter for the time being with Trump tweeting ‘mission accomplished’.

President Trump has now proposed fresh sanctions against Russia that go directly to dealing with equipment related to Syria and chemical weapons. President Putin has noted that further western attacks on Syria would ‘inevitably lead to chaos in international relations’.  Russia has also raised the possibility of implementing trade sanctions against the US. It is reported to be considering blocking sales of titanium to America, which is a key component in Boeing aircraft, making up 14% of the airframe of the 787 Dreamliner.

President Trump was also in the spotlight back home. The FBI, under referral from Office of Special Counsel, Robert Mueller raided the office of Trump’s personal lawyer Michael Cohen. Meanwhile, in another blow for President Trump, US House of Speaker Paul Ryan will not run for re-election this year.

In the USA, headline CPI inflation edged lower by 0.1% in March as gasoline prices fell leaving the annual inflation rate at 2.4%. However, core inflation continued to build by 0.2% to 2.1%, broadly as the US Federal Reserve (Fed) expected. The latest Fed committee meeting remained tilted to a ‘hawkish; stance, with greater confidence about the upward path of inflation, while acknowledging the potential headwind from trade barriers.

The head of the Bank of Japan provided another confident assessment that inflation will return to its 2% target, while pledging to maintain monetary support.

The Chinese Ministry of Commerce said retail sales are expected to have risen by about 10% in the first quarter of 2018. March trade data showed exports up by 2.7%, much weaker than expected while imports increased by over 14%, above expectation.

Finally, an example of US sanctions in action. On Friday, April 6th the US imposed sanctions on seven Russian oligarchs, believed to be among President Vladimir Putin’s closest supporters and advisors.  Russian aluminium giant, Rusal controlled by one of those on the list, Oleg Derispaska saw its shares nearly halve in value following the imposition of sanctions.

One further thought on sanctions. In February President Trump imposed tariffs on Chinese aluminium and this month he has targeted Russian aluminium. Wouldn’t it be ironic if easing trade tensions between the US and China led to China actually exporting more aluminium to America to replace sanctioned Russian supply?