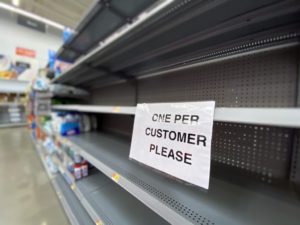 An increasing number of UK companies are commenting on the pressures related to the serious shortage of HGV drivers. The Road Haulage Association estimates there is currently a shortage of 100,000 drivers in the UK, out of a pre-pandemic total of about 600,000.

The ‘pingdemic’ is emptying supermarket shelves and the problem could get worse before it gets better with summer holidays looming. The UK government is to allow drivers to spend a bit more time on the road by adjusting the Drivers’ Hours regulations from nine to eleven hours, twice a week until 8th August.  This is only a quick fix, not a solution to the problem, and has already raised safety concerns.

The shortfall is also due to other factors including Brexit and Covid-19. Following Brexit, many European drivers went home. Furthermore, many of these are paid by the kilometre rather than by the hour, so delays from additional border bureaucracy have meant they have avoided the hassle of driving into and out of the UK to Europe. Tax changes also mean there is less incentive for them to come and work in the UK.

The average age of HGV drivers in the UK is 55 and more drivers are retiring, which has compounded the shortage. Covid-19 has complicated things by restricting training for new drivers and creating a large backlog of HGV driver tests. Wages for existing HGV divers are rising fast, which may attract new drivers, but the industry needs to attract younger drivers – unsociable hours and being alone in a cab for long hours may not appeal to many youngsters. Will big pay hikes change that? Younger people have moved into internet shopping and food delivery logistics – driving vans, which does not require an HGV licence. Can the haulage industry attract some of these? The industry is also calling on the government to add foreign drivers to the Shortage Occupations list, allowing them to qualify for a skilled worker visa.

The government needs to get a grip on this problem as a shortage of HGV drivers could adversely impact the pace of the UK’s economic recovery.

Concerns about the spread of the Delta variant and global economic growth overshadowed inflation last week and led to another market wobble. An increased level of risk aversion saw government bond yields fall with the US 10-year Treasury yield at one point dipping to under 1.2%. It was only a few months ago that it touched 1.8% on inflation fears! Investors will now be studying US earnings for management teams thoughts on global supply chain disruption and any signs of slowdown in trading due to lockdown measures being re-imposed in some countries.

Global equity investors appear to have become more concerned about Delta infections, even though vaccines have significantly reduced hospitalisations and the severity of the illness. However, just how lethal the Delta variant is to those unvaccinated is reflected in data from India. India has officially recognised more than 414,00 Covid-19 deaths so far. However, scientists have calculated excess deaths are ten times higher than this at over 4 million. While England unlocked fully with Freedom Day, the UK was placed on the highest level of risk by US travel guidance, with American citizens warned against travelling here. Nevertheless, it is encouraging to see falling cases for six consecutive days – the biggest fall in reported coronavirus cases, outside of lockdown, since the pandemic began. Sterling dipped to a six-month low against the US Dollar at $1.36, but recovered to be unchanged on the week, as falling UK Covid numbers reassured currency markets.

The other issue for investors is global supply chain challenges and inflationary pressures arising there from. Transportation rates look set to remain at elevated levels. According to spot rates from the Dewry World Container Index it currently costs $9,733 to ship a 40ft container from Shanghai to Los Angeles. This cost is up 236% on the same time last year while the increase across eight other major global shipping routes is 336%.

In the UK, more confused guidance from the government on the NHS app and self-isolation. At least from 16th August, some fully vaccinated key workers may no longer have to self-isolate. Meanwhile, is the test and trace system creaking? At one point last week, the UK government website was not taking orders with the error message ‘try again tomorrow when more tests become available’. Some of these concerns as a result of Delta infections were reflected on the PMI numbers which hit a four-month low. In particular, the services PMI saw a drop from 62.4 to 57.8, with continued shortages of both staff and raw materials. Meanwhile, retail sales remained strong (+0.5% compared to last month), benefitting from the Euro 2020 and food stores being the largest contributor to growth.

In Europe, PMI numbers were strong, with the composite index at 60.6 – the highest level in 21 years. On the other hand, the ECB remains cautious with a higher rate of bond purchases under their emergency program (PEPP), which is due to end in March 2022. ECB officials continue to expect a transitory period of inflation above target, having taken a more dovish stance after the recent shift to a ‘symmetric’ 2% target. Economists do not expect a rate hike until late 2024, in contrast to a more hawkish approach from other major central banks.

Geo-political tensions remain. The US, UK, EU, Australian and Japan have accused China of malicious cyber activity with a recent attack on Microsoft Exchange – a popular email platform with some 30,000 organisations affected globally. China denied the claims.

Brent oil briefly slipped to $68 as traders digested the latest OPEC+ agreement that will gradually increase monthly production until late in 2022, when all of the 9.7 million barrels a day that had originally been withheld from the market are restored.

Finally, another example of global supply chain disruption due to pandemic lockdown measures. Production at some of Nike’s largest plants in Vietnam has been disrupted as Covid cases rise. About half of Nike’s shoes are thought to be manufactured in Vietnam. Nike has refused to comment on whether store supplies could be affected. Could we see panic buying and a run on trainers?