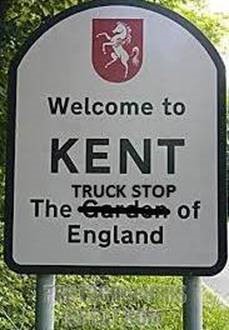 Deal or no deal, Brexit looks to be still proceeding. Logistics companies formally haulage or freight firms, are concerned about the prospect of trucking hell.

Businesses are facing with the prospect of a wall of bureaucracy, that threatens chaos at the border when life begins after Brexit on 1st January 2021. Tony Shally, Managing Director of freight specialist Espace Europe said ‘It’s going to be carnage. We’ll be fire-fighting from the 1st of January’. Even the UK government has suggested that as many as 7,000 trucks could be held in Kent.

The main concern seems to be an untested IT system and paperwork. The Association of Freight Software Suppliers has said its members could not guarantee delivery of the new software required by 1st January. Meanwhile, the government has published a new 271-page Border Operating Model covering a wide range of business sectors. A step-by -step guide on one of the main custom clearance sites gives a flavour of what logistics companies can expect.  Points 12 to 15 state that a ‘Movement Reference Number’ is generated by a ‘Transit Accompanying Document’ and ‘Exit Summary Declaration’ and should be lodged with the ‘Goods Vehicle Movement Service’. This then generates a ‘Goods Movement Reference’ which is given to the driver before a ‘Kent Access Permit’ is secured to enter the county of Kent. Point 16 notes that any trucks arriving in France without the correct documentation could be sent back. One senior director of a British supermarket said he did not know whether he could keep his fleet of distribution trucks moving. ‘If its fresh food, if you lose a day and you lose the sequence, the whole thing falls over’.

Hopefully, a Brexit deal should ease a lot of the uncertainty. A no deal sounds as if it would be a real headache. This also assumes no disruption from French fishermen who might block ports and the Eurotunnel in protest! At least Belgium’s fishermen may be happier. They are hoping to take advantage of the Fisheries Privilege post Brexit. This was a charter issued by Charles II in 1666 the city of Bruges as a demonstration of his gratitude to the city during his 3-year exile there. The charter allows 50 fishermen to fish in British waters for eternity!

As ever there are winners and losers, but no wonder both UK and EU businesses are desperate for a Brexit deal. Due to Covid-19, should Brexit be postponed?

The US presidential election is the key event his week although there is still a strong possibility that the result may not be known before the week is out. With risk assets wobbling under the Covid-19 second wave and more national lockdowns, another source of uncertainty is unwelcome!

The rise in Covid-19 cases, but particularly within Europe and the spectre of further lockdown measures cast a shadow over the sustainability of the economic recovery during the fourth quarter of 2020. The difference to the first wave however is that governments seem determined to keep as much of their countries in work to avoid the economic pain of the earlier full lockdown. Germany is implementing a partial lockdown but importantly is keeping most businesses running, while England and France are both imposing a four-week lockdown, albeit less severe than in the spring. The key question is will this bring the infection rate under control and will the lockdown need to be extended?

The more weighted an economy is to the services sector, particularly hospitality, travel and leisure then the larger the impact is likely to be on the economy. Manufacturing driven economies such as Germany and Italy may prove more resilient as long as industry keeps going. Meanwhile, the European Central Bank (ECB) said it expects European banks to tighten corporate lending further in the fourth quarter as they become more worried about credit risk as more lockdown measures are imposed.

President Trump said that the Republicans would approve a pandemic rescue package for the US economy after the 3rd of November election. If Joe Biden wins the election with a clean sweep then expect the Democrats to push through a whopping big one pretty quickly! Joe Biden currently enjoys a bigger lead in national polls than any prior candidate facing an incumbent president. However, the key question is whether this translates into victories in battleground states, where the race is tighter and where the election will ultimately be decided. Investors remain concerned about a contested election result despite the polling data.

Following the recent $1bn missile deal, the US approved a $2.4bn sale of a harpoon coastal defence system to Taiwan, a move sure to anger China. The Chinese are now reported to be considering sanctions against Boeing, Lockheed Martin and Raytheon. Meanwhile, India and the US have signed a military agreement on sharing satellite data aimed at countering China’s influence in the Pacific region. Elsewhere, the spat over the Covid-19 outbreak between China and Australia continues with China rejecting an appeal by Australia to scrap a tariff on its barley exports.

Brexit talks are believed to be making progress and hopes remain of a deal by early November. Despite all the political bluster surely neither side can afford not to do a deal given the damaging impact of second wave Covid-19 lockdowns on the UK and Eurozone economies?

In the UK, the recovery in the housing market appears to have persisted longer than many economists expected with mortgage approvals up by a further 7% in September. However, the second lockdown, while not as draconian as the first, could lead to a double-dip recession, with the brakes slammed on economic recovery in the fourth quarter. Some economists are forecasting that the UK economy could now contract by between 5%-8% during the fourth quarter. However, the hit from the new lockdown measures should be significantly less than in the Spring with the initial impact confined to those sectors directly impacted.

The European Central Bank (ECB) delivered just about the most dovish signal possible without any policy adjustment. ECB President Christine Lagarde confirmed the broad agreement that further action is required and promised the ECB would recalibrate its instruments ahead of its next meeting in December, implying that all options are open. The ECB acknowledged that risks to the Eurozone are ‘clearly tilted to the downside’.

The Bank of Japan lowered its economic growth and inflation forecasts for this fiscal year due to Covid-19 and is now expecting the economy to contract by 5.5% but it revised its growth outlook upwards for next year to 3.6%. Its massive monetary easing policy is unchanged.

Factory activity in China slowed slightly in October but remains in expansion territory with a PMI reading of 51.4.

Chinese financial technology giant, Ant Group, backed by Jack Ma, founder of e-commerce platform Alibaba, looks set to be the world’s largest stock market float this year with a value of $280bn. The company is listing on the Shanghai and Hong Kong markets as opposed to the US NASDAQ technology market -another sign of the spat over technology between the US and China. The issue is said to be massively oversubscribed although it appears Chinese banks are offering potential buyers margin loans to apply for shares. One finance house is said to be lending at 33 times leverage so that for every HK$3 an investor puts down, they can borrow HK$100!

Brent oil fell back to a five-month low of under $37 on further Covid-19 lockdowns and as Libya continued to ramp-up output. However, there are suggestions that Russia and Saudi Arabia are in agreement about extending the current OPEC+ production cuts through 2021.

Finally, how the other half live. Soaring numbers of wealthy flyers are switching to private jets to reduce the risk of catching Covid-19 from other passengers on regular commercial flights. However, private jet operators remain concerned about the corporate travel market and restrictions caused by a second wave. When somewhere is closed, it is closed for everyone and it doesn’t matter if you came in on a private jet!