Apparently, the government always considered a pandemic to be the most serious threat to the UK economy. How?

This is because a pandemic was listed at the top of the National Risk Register, a little-known Cabinet Office document that catalogue’s the country’s worst nightmares. This is actually based upon a classified document, the National Risk Assessment.

An illustration of the high consequence risks facing the United Kingdom: 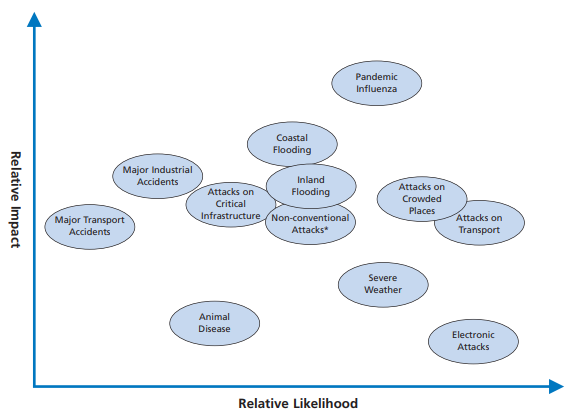 Solar flares knocking out the communications grid, cyber-attacks causing power outages, terror attacks, riots and extreme weather are amongst the list of threats. Each one is graded according to its severity and likelihood. Disasters must have at least a one in 20,000 chance of occurring in the UK in the next five years. Nuclear war and asteroid threats are therefore not thought to be on the list currently.

The UK government has been criticised for not imposing Covid-19 lockdown measures sooner or securing enough PPE for healthcare workers. Hindsight is a wonderful thing. However, who honestly thought in early 2020, when pictures emerged on social media of a temporary hospital being built in Wuhan, to deal with a mysterious flu outbreak, that just a few months later that the UK and the world at large would have seen such a death toll and economic hit from what we now call Covid-19?

Market’s do have the habit of climbing a ‘wall of worry’. Besides the National Risk Assessment, investors are always having to look ahead and consider what is occurring. At the moment there are plenty of things to worry about – Covid-19, economic lockdown pain, US and China relations and Brexit- the list goes on.

Many companies seem to navigate uncertainty successfully and a winning business model usually outperforms regardless of what’s occurring. In the short-term markets seem to have accepted the US election outcome and the potential policy stalemate. Although, investment always involves risk, it just depends upon what amount of risk you are comfortable with.

With Joe Biden signalled to be US President, albeit subject to legal challenge, is this one risk we can look forward to crossing off?

Despite the alarming increase in daily new cases of Covid-19 in the US, American investors reacted positively to the outcome of the presidential election. The prospect of an inconclusive election was viewed with some trepidation, but it turns out that gridlock in Washington was just what investors wanted! Investors also appear to be getting excited about imminent vaccine trial news from both Pfizer and Moderna, while in the UK, Astra Zeneca is not far behind them. UK investors also received a welcome ‘shot in the arm’ with a noticeable pick-up in takeover activity while the Bank of England increased its QE stimulus programme.

As we write, in what could be the most positive scientific development to date, Pfizer has today announced its Covid vaccine prevents 90% of infections in a large-scale trial. Markets are flying!

The US presidential election proved to be every bit as controversial as it could have been. Equities rose on the rising probability of gridlock in Washington which should prevent either party from inflicting too much damage on corporate America. The initial view is that once legal challenges are over that Joe Biden could prove to be a’ lame duck’ president as he would be the first president since George H.W. Bush to enter office without control of both the House and Senate. However, this also implies that US politicians may struggle to agree a fiscal stimulus package that a Democratic blue wave would have delivered quickly. Does the baton pass to the US Federal Reserve once again to fill the gap as Covid-19 cases continue to rise? The Chinese will no doubt be happiest with a ‘lame duck’ US president given the previous trade tariff war and Chinese investors appear to be expecting a shift in trade relations with the US.

Covid-19 continued to overshadow markets as deaths and infections worldwide surged by daily records. However, there was a ray of hope as England started a 28-day lockdown. The director of the Oxford vaccine trial said that there is a ‘small chance’ a jab will be ready before Christmas. However, the ongoing threat from Covid-19 was also highlighted by Denmark which announced that it will cull its mink population of 17million after a mutation of the coronavirus found in the animals spread to humans.

Tension between China and Australia continues to mount as China ordered traders to stop purchasing at least seven categories of Australian commodities including barley and timber. Relations have deteriorated since Australia barred Huawei from building a 5G network in the country and the Australian government called for an independent probe into the Covid-19 outbreak. Watch out UK given our recent 5G and Hong Kong announcements?

The UK and EU officials will resume trade talks this week which appear to be going down to the wire. Michel Barnier reported to the European Commission that there are still ‘very serious divergences’ with the UK on a deal -you’ve guessed it -fishing, level playing field and governance. Boris Johnson said on Sunday that the ‘outlines’ of an agreement were clear and a deal was ‘there to be done’. Both sides must be under greater pressure to agree a deal given Covid-19 but Boris Johnson even more so if Joe Biden is US President. Will common sense prevail?

The UK October manufacturing PMI of 53.7 suggested that the sector has continued to recover during the early part of the fourth quarter albeit the pace of growth was a four-month low. Services   activity dropped in October with a PMI of 51.4 showing that the sector was close to stalling even before the imposition of the latest national lockdown in England. Reflecting the Covid-19 lockdown and Brexit uncertainty, the Bank of England (BoE) is to pump an extra £150bn into the UK economy through its QE bond buying programme. Interest rates were held at 0.1% so no move to negative interest rates yet! The BoE said that the outlook for the UK economy remains unusually uncertain. The PMI readings suggest the UK is on course for a double dip recession. Chancellor Rishi Sunak also confirmed that the furlough scheme would be extended until the end of March 2021, with the government paying 80% of wages.

The European October manufacturing PMI was 54.8 with a particularly strong performance from Germany. In its latest forecast the European Commission lowered its economic growth forecast for the Eurozone economy for 2021 from 6.1% to 4.2%.

The US October manufacturing PMI was better than expected at 59.3 while new orders surged to a 17-year high.

Finally, as the world battles its worst economic crisis in years due to Covid-19, it is reported that China’s young billionaires, under the age of 40, have amassed a combined fortune of more than $223bn this year. The world has never seen this much wealth created in just one year. E-commerce businesses feature heavily in the list. China now has an estimated 878 billionaires with a combined wealth of $4trillion.